Part II of the series of posts describing the 16 games in the Tavern's current poll. If you haven't noticed yet, I'm working my way from the bottom of the list. 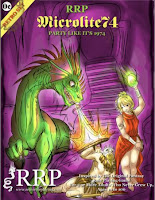 Microlite 74/75 -While Microlite74was originally designed as an introduction to "old school" play for players more familiar with modern rules systems based on the Primary Fantasy SRD, it has become a game that many groups have chosen to run full blow campaigns with. Microlite74 version 3.0 -- released in October 2011 -- has been designed as a complete rules set for regular play, although it can still serve as a fast introduction to old school play for those more familiar with later editions. All three versions of Microlite74 use a rules-lite OGL based game system that old school grognards – especially those who cut their gamer teeth on "0e" – should find equally enjoyable. The system also easy to modify with your own house rules or rules drawn from your favorite edition of the world’s most popular fantasy roleplaying game. The game system is also compatible with most 0e-based rules, adventures, and other materials. (Free and nicely put together)

Basic Fantasy RPG -The Basic Fantasy Role-Playing Game is a rules-light game system modeled on the classic RPG rules of the early 1980's. Though based loosely on the d20 SRD v3.5, Basic Fantasy RPG has been written largely from scratch to replicate the look, feel, and mechanics of the early RPG game systems. It is suitable for those who are fans of "old-school" game mechanics. Basic Fantasy RPG is simple enough for children in perhaps second or third grade to play, yet still has enough depth for adults as well. (a game that is often overlooked in the OSR niche, which is a shame, as it is a damn good game)

LotFP Weird Fantasy -LotFP: Weird Fantasy Role-Playing presents a sinister and horrific twist on traditional fantasy gaming and provides you with all the tools needed to create and run a long-lasting campaign tailored to your specific vision. Simple enough for a beginner – with material intended for those that have never before played a role-playing game – yet meaty enough for the veteran. (changes many common preconceptions of an OSR game, including only true fighters increase in THAC0 - great atmosphere) 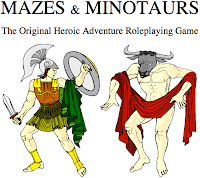 Mazes & Minotaurs -Mazes & Minotaurs is what the first fantasy roleplaying game could have been if its authors had taken their inspiration from Jason & the Argonauts (yes, the 1963 movie with all the cool Ray Harryhausen monsters) and Homer’s Odyssey rather than from Tolkien’s The Lord of the Rings or Poul Anderson’s Three Hearts & Three Lions. In other words, Mazes & Minotaurs is :

- a tongue-in-cheek tribute to old-school gaming

- a complete and fully playable roleplaying game !
Posted by Tenkar at 3:55 PM