This review went up in early January and I had no clue. Long story short - he gets it :)

The video comes in at 12 minutes - its worth the time to watch.
Posted by Tenkar at 8:00 PM No comments: 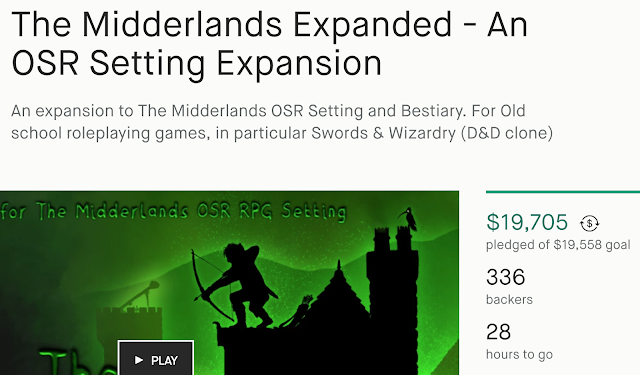 The Midderlands Expanded Kickstarter has hit its funding goal with 28 hours left in the funding period and there was great rejoicing. Woot!

The Rappan Athuk 5e Kickstarter is right around the corner. For the OSR it means new content and VTT maps. More info when I have - literally - more info to share.

Gary Con is in 2 weeks. And yes, I'm running some Rappan Athuk - with Swords & Wizardry, of course ;)

Mentioning Swords & Wizardry...  Swords &Wizardry Continual Light is knocking on nearly 1,100 copies sold between print and PDF. I should have a small handful of print copies available at Gary Con, maybe 10 copies. Will sign upon request.

The Tavern's Discord Server has over 375 members. Live chat with other OSR fans is 24/7.   https://discord.gg/fReGmuD

I picked up the Rocketsmart Notebook Set last night to see if it works as well for drawing maps as I think it will. Pricing is today only. Should receive my set sometime mid week. No affiliate link, just a good deal if such stuff interests you.

Think I'll stay home and assemble bookcase shelving today. Sinus headache has spoken. Well, that and rain. Which is probably not helping with the sinus headache.

Email ThisBlogThis!Share to TwitterShare to FacebookShare to Pinterest
Labels: bits and pieces 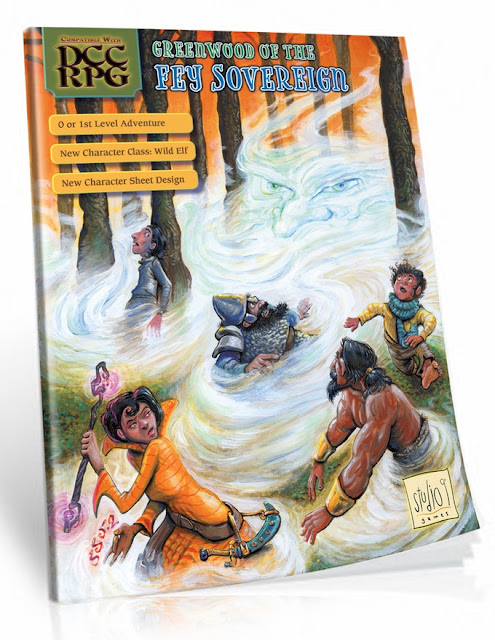 Some of my favorite DCC RPG adventures are the Zero-Level funnels. Greenwood of the Fey Sovereign looks like a fun little funnel at the right price - 7 bucks for the PDF, 10 bucks for the Print copy and 15 for Print plus PDF. 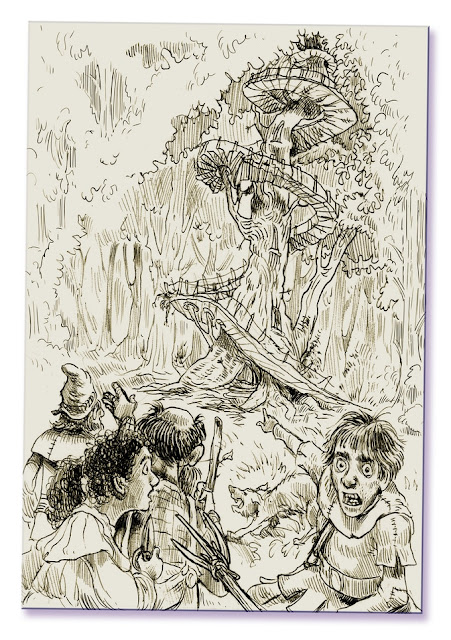 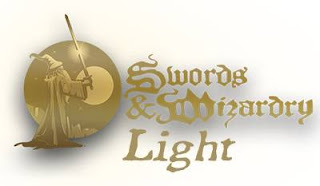 Its a soft announcement because I don't have a set date for the first session yet, but starting sometime in the last half of March I plan to start running a more or less monthly session of Swords & Wizardry Light aimed at players new to the OSR and lapsed gamers. All will be welcome, so don't let experience with the OSR turn you away.

The topic arose on The Tavern's Discord sever and it simply makes sense - there should be an avenue for players new to the OSR to get their feet wet.
was brought up in

Plan is to use Discord for voice. Roll20 will probably be used for the Virtual Table Top - or perhaps no VTT. We MAY record the voice from the Discord channel and post it as a podcast for others to listen to. Haven't decided yet.

First session will probably be in the evening (NYC time) but I'm open for afternoons / mornings if there is enough interest. Last night during Tavern Chat we let The Bot roll the virtual dice to decide who would be gifted with The Tenkar's Tavern Monthly (more or less) Box of Hopefully Not Crap for the Month of February.

GreyhawkBard, you are the lucky one! Email me at tenkarsDOTtavern at that gmail thing and we'll get this sent out to you. We need you to respond before next Wednesday's Tavern Chat. If we don't hear from your before then, we'll pick a new person to receive the box of hopefully not crap ;)
Posted by Tenkar at 11:03 AM 2 comments:

Email ThisBlogThis!Share to TwitterShare to FacebookShare to Pinterest
Labels: tenkars tavern monthly gift box of what i hope is not all crap giveaway 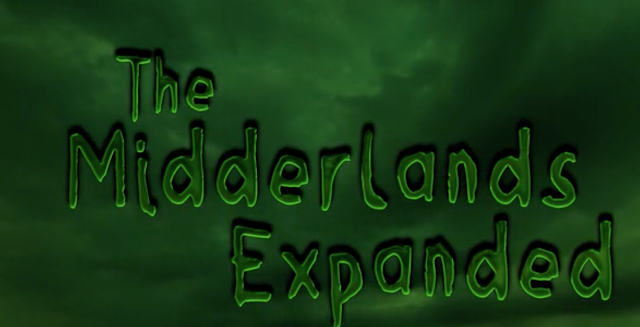 Just a quick reminder for folks that are interested in The Midderlands Expanded Kickstarter - you have three days left to back it if you haven't yet.

I have the original Midderlands and its probably one of the, if not "the", best setting books I've come across in nearly 40 years of gaming. +MonkeyBlood Design (Glynn Seal) and team did some amazing work and I'm expecting more of the same from The Midderlands Expanded.

Don't believe me? How about believing +Matt Finch :


“[The Midderlands] as a small area campaign supplement is the best I’ve ever seen, displacing Dave Arneson’s Blackmoor First Fantasy Campaign area, which up until now -- and that’s decades -- has been my favorite one.” - Matt Finch (Creator of Swords & Wizardry).

What is going to be in the new 'The Midderlands Expanded' book? 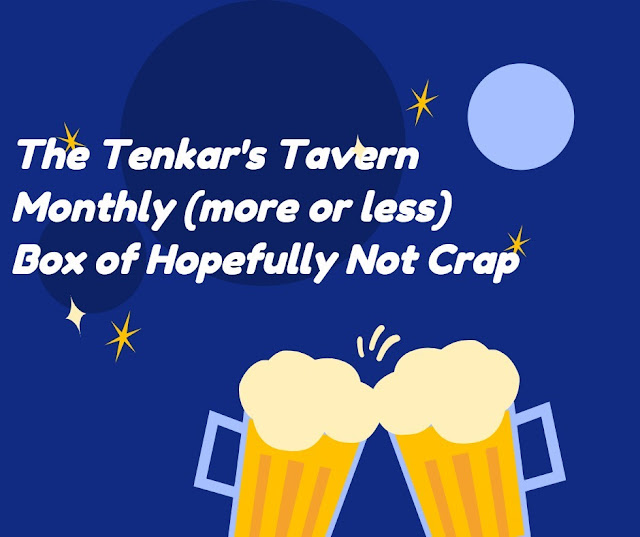 Yep, its a Wednesday and that means tonight is a Tavern Chat, where various and sundry members of the OSR gather to "chew the shit" and have what has been called "an amazingly entertaining live podcast that we are very grateful is NOT recorded" ;)

Tonight at 9:30ish, I'll be announcing the receiver of the Tenkar's Tavern Monthly (more or less) Gift Box of What I Hope is Not all Crap Giveaway - you can still comment on the original post until 9 PM tonight.

PS - no need to be present to be gifted - we'll announce on the blogside later tonight :)
Posted by Tenkar at 3:52 PM 1 comment:

Email ThisBlogThis!Share to TwitterShare to FacebookShare to Pinterest
Labels: discord, tavern chat, tenkars tavern monthly gift box of what i hope is not all crap giveaway

Petition to Make Aerdy (The World of Greyhawk) Great Again 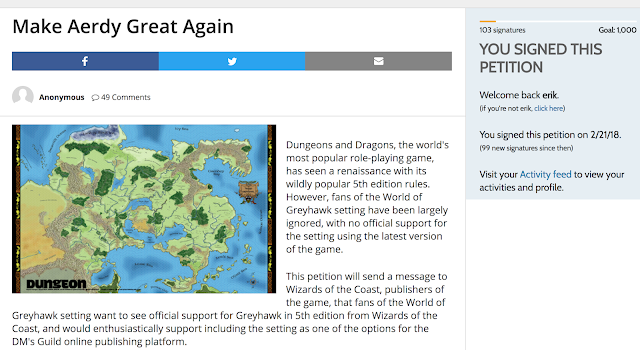 Our very own +Joseph Bloch (aka The Greyhawk Grognard) has started a petition to have WotC officially support the World of Greyhawk with the Dungeons & Dragons 5th Edition rules.

Personally, I'd love to see some new Greyhawk material :)

https://www.ipetitions.com/petition/bring-back-greyhawk
Posted by Tenkar at 10:40 AM 4 comments:

I bought the 1st Dragon Age Boxed Set when it released and I was impressed. It had flavor and a system I could grok. Later, Green Ronin removed the video game's IP and released Fantasy Age. Both are part of the Dragon Age & Fantasy Age Bundle.

For 10 bucks you get what is effectively a Fantasy Age starter set. For a hair over $24 you get Dragon Age and Titansgrave as well as some other material.

I'm in for at least Fantasy Age but I never followed up with the later Dragon Age releases. Hmmm... decisions, decisions.
Posted by Tenkar at 7:04 PM 3 comments:

Update - Up the River with #ConManKen - 8 Confirmed FTC Complaints Filed 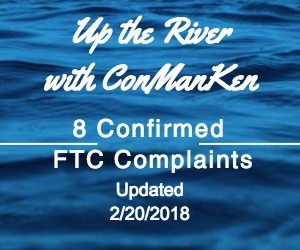 As detailed in a prior post here at The Tavern, backers of the KotDT: LAS Kickstarter are able to file FTC complaints against Ken Whitman in regards to the KS.

I am unable to find contact information for the woman from Atlanta that Ken fleeced for tens of thousands of dollars. If anyone has her contact info, please suggest she make a complaint at the link below: 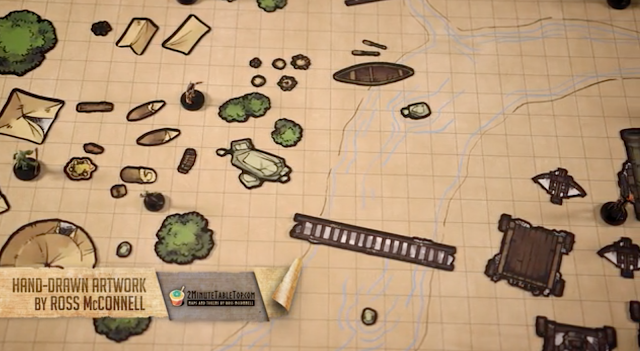 This is one of those Kickstarter projects where I say to myself - "how come no one thought of this before?" Its basically Colorforms for Tabletop RPGs.

Tabletop Tokens - Colorforms for adults!  (they can pay me later for that witty catchphrase ;)

None of the initial sets really strike me as something I need, but a Dungeon Trappings set would be awesome! 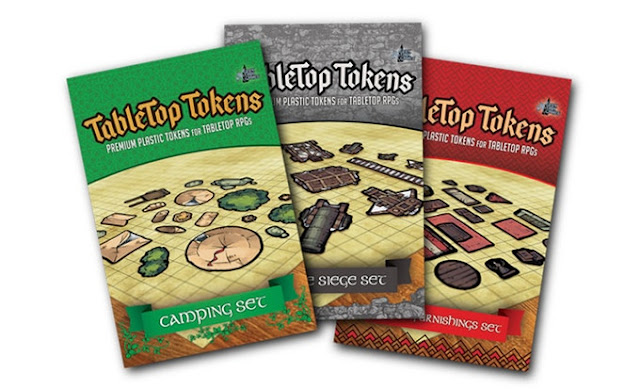 Its funded with 22 days to go.

Heck, I might still be tempted if the right sets get added as stretch goals... 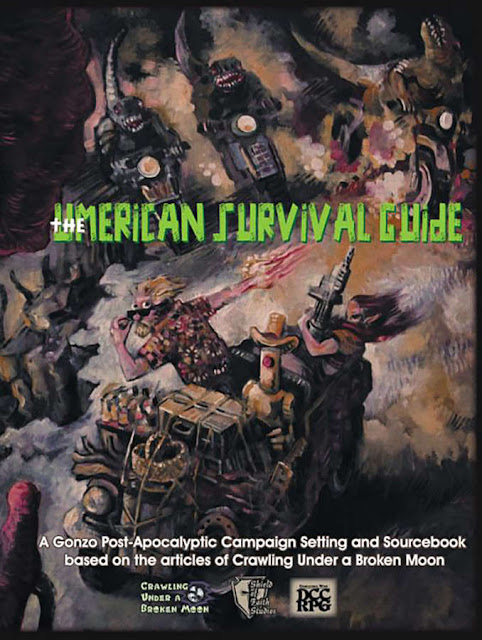 Today's RPGNow Deal of the Day is the Umerican Survival Guide, Chase cover for the DCC RPG. Normally $9.99 in PDF, its on sale for $5.20 until tomorrow morning (Print plus PDF versions are also discounted by 3 bucks)

Within this irradiated tome you will find:

That's and affiliate link above. Help keep the lights on at The Tavern :)

Posted by Tenkar at 5:48 PM No comments: 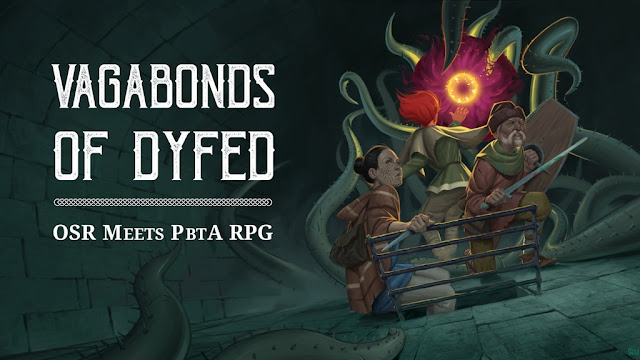 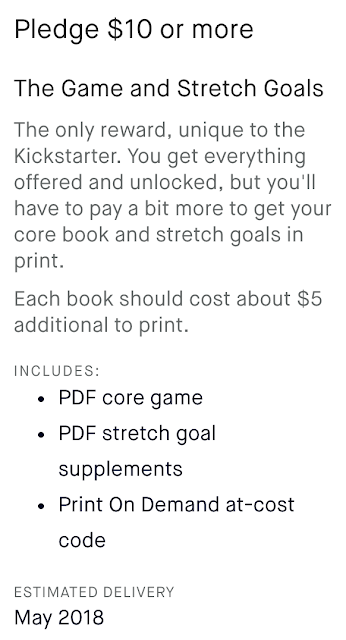 Thanks to a Tavern Reader, I was pointed to the Gygax Memorial Fund's 2016 Federal Return, which was filed on May 25th, 2017.

The first thing that stood out to me is that the Fund raised a whole 10 bucks in 2016. That takes some special effort to have that little a return. The Fund spent over $3,300 over the same period.

But what really stood out was the Schedule O page.

Isn't that exciting? The Memorial will be completed by May 25th of this year! Just over 3 months away. I need to get my plane tickets and a hotel.

BTW, the 2015 return promised the memorial in 2 years and the 2014 promised it in 5 years. They should have stuck to the initial time frame.

Oh, notice objective "E" above? The Fund was founded in 2010. They STILL haven't started a scholarship?

Like previous years, the Fund has accomplished nothing and keeps losing money. 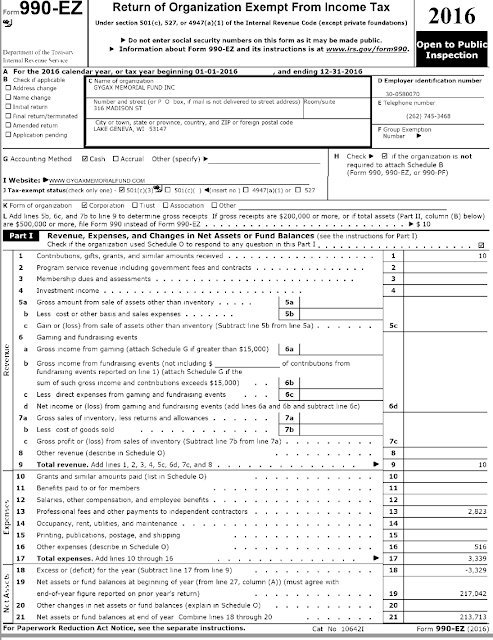 Another year without even minimal interest being earned. 1% interest would have covered half the expenses - and would have returned over 200 times what their fundraising did. I can see why they haven't uploaded this return to the GMF website - its embarrassing.

For those playing along at home, the year end balance of the GMF since its inception. (note - most recent tax return back to the Fund's first tax return)

Email ThisBlogThis!Share to TwitterShare to FacebookShare to Pinterest
Labels: gygax memorial fund
Newer Posts Older Posts Home
Subscribe to: Posts (Atom)
Tenkar's Tavern is supported by various affiliate programs, including Amazon, RPGNow,
and Humble Bundle as well as Patreon. Your patronage is appreciated and helps keep the
lights on and the taps flowing. Your Humble Bartender, Tenkar