As of the time of writing, 3 of the 4 games in the post are in the top 3 of the current poll. 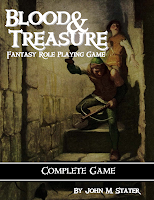 Blood & Treasure - So, what is Blood & Treasure? It's an RPG that lives somewhere between the various editions. It tries to link up a simple set of rules that are recognizable to most people who have played the game in the last 30+ years with all the goodies that 30+ years of gaming creativity have given us. (Very recent release. It's getting good word of mouth in the blogosphere, including by me. I dare say it could be 5e, if 5e weren't being written for corporate reasons)

Crypts & Things - What is this game about? It’s about exploring the ruins of the dying world of Zarth. Fighting off the Others, alien monstrosities from outside of your reality. Making your mark on the world before it dives into the sun Nemesis.

Be a wild Barbarian, a deadly Fighter, a soul-torn Magician or a sword sharp canny Thief, fighting evil Tyrants, foul Sorcerers and demons in a world rapidly dying and heading towards its final Nemesis.

In short its a Swords and Sorcery role playing game using the original edition of the world’s favourite role playing game.  Base upon the Swords and Wizardy rules. (whereas AS&SH is a heavy game with many classes and setting material, C&T is on the other extreme - lightweight and based on a familiar ruleset. Different approached to S&S style gaming, and both are valid) 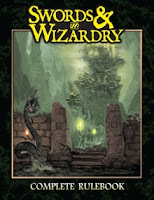 Swords & Wizardry Complete - This is the game you played 20 years ago. It's true to the original style and philosophy that made the game great. No "Spot Checks" here. Simple, flexible rules that allow players and game masters alike to roll play and roleplay.  This stand-alone tome provides all the rules you need to play the game. Its easily transferable as a rules set for other retro-clone games as well as those old dusty modules you still have in the attic. (one of my favorite OSR rulesets. reminds me of pretty much how we played AD&D back in the days - by ignoring most of the wonky rules ;)

Labyrinth Lord -Down to the Roots of Fantasy Gaming: 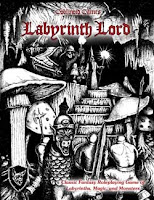 "Enter a world filled with labyrinths, magic, and monsters! You can take the role of a cleric, dwarf, elf, fighter, halfling, magic-user, or thief on your quest for glory, treasure, and adventure! This is a complete role playing game. All you need are a few sheets of paper and some dice. Welcome back to a simpler old-school gaming experience. The Labyrinth Lord awaits your arrival. Can you survive the dangers of the labyrinth?" (one of the big 3 of the OSR, along with OSRIC and Swords & Wizardry. This was the first ruleset I found after Castles & Crusades. Really can't go wrong with any of these rulesets.)
Posted by Tenkar at 9:06 PM