The List of 16 - Part I - Mutant Future, Starships & Spacemen,Space Princess and Tombs & Terrors

It was pointed out to me that I probably should do a series of short posts highlighting the 16 games that are currently in the poll, so this is the first part of that series. Without further ado...

Mutant Future - Mutant Future is a nuclear post-apocalyptic science fantasy game. It is created in the style of similar RPGs from the late 70s, but built around the core Labyrinth Lord rules so that these two games are fully compatible. (Think Gamma World type setting) 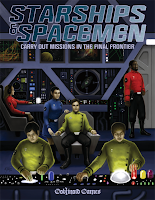 Starships & Spacemen (2e) - This second edition of the classic game is compatible with Labyrinth Lord and Mutant Future. The best elements of the first edition have been kept--the classes and subclasses, the excellent starship rules, and the space adventuring rules. Classes, races, and abilities have been made more in line with Labyrinth Lord. (as a supporter of the Indiegogo project for S&S, I have access to the current PDF - should release in October) 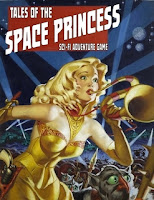 Space Princess - Take your dungeon crawls into the future! Tales of the Space Princess is a rules lite game inspired by the original fantasy rules. Character creation in about 5 minutes, learn the rules in about 10 minutes and then you're ready to delve into the space fortress to wrest the Space Princess from the clutches of the Dark Lord! (from what I've read, it plays very much like "Dungeons in Space" in a good way) 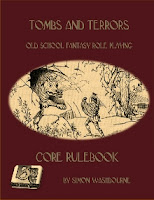 Tombs & Terrors - Based on the rules first found in Go Fer Yer Gun! and seen later in Medieval Mysteries, Tombs & Terrors is an unashamedly familiar role playing game of delving into subterranean crypts and looting the treasure. Including 4 traditional character classes (Cleric, Fighter Mage and Thief) plus 2 "exotic" ones (Barbarian and Troubadour), and 5 races (Dwarf, Elf, Giant-kin, Half-elf and Human), this game is condensed for simplicity but covers ground that you will understand. Compatible (with some tweaking) with sourcebooks and supplements that you already have. (Not a clone, but a nice addition to the "Old School" feel ensamble of games)
Posted by Tenkar at 10:01 AM