Whereupon I Traded in My GM Hat to be a Player, and Met With Death 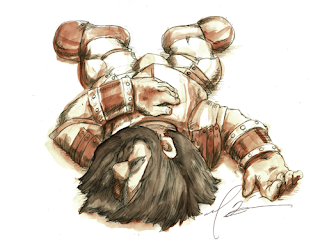 When I gamed via Fantasy Grounds 2, it was always as a player. Not because I didn't want to GM, but because I didn't have enough confidence in myself to run games with the software. Damn shame to, as I bought an Ultimate account (or whatever they call it). FG2 is a good program, but not so user friendly if you want to design your own (or port) adventures into the program.

I was psyched about iTabletop - don't even ask me how much I put into that. Never seemed to get where I needed it to be to run with it.

Then came G+ and Hangouts and Tabletop Forge (Dinner With Dragons before the 2 merged their efforts) and the D&D Next early playtest - and I was back as a player again. But not only that, I could actually see myself running games using Hangouts - it felt right.

When our playtest group felt like moving away from D&D Next, I offered to run ACKS and I haven't looked back. Heck, I even ran a handful of DCC sessions. Hangouts is just a natural way to emulate gaming at a physical table - without the long drive, dropped dice and messy clean up of snacks and garbage at the end.

Last Saturday I gladly tossed the GMing reins back to my first (and only thus far) G+ Hangout GM - Greg Christopher. ACKS will pick up later in a few weeks, without missing a beat. In the meantime, we are getting to playtest Greg's new game - Ambition & Avarice. A&A is Old School in feel, much like the DCC RPG is, while still straying a bit from the preconceptions that go along with OSR games. That being said, it certainly plays like an OSR game.

Our party of four had 2 outright kills of PCs (myself included) and a near TPK (1 PC walking out on is own power out of the 4 of us).

It felt really nice to be a player again. It felt great to get my PC killed. Really. Even with 4 of 6 scores at 15 or better, rolling 3d6 in order. I was sorry to see my Dwarf die, but I was happy to die. I was happy he could die. Death didn't accompany us on the D&D Next playtest. Saturday night we became fairly intimate with him, unlucky rolls and all.

Oh Shit! Run! is advice my unnamed dwarf should have followed. Any game that can emulate that well is okay in my book. Needless to say, I'm looking forward to this Saturday Night's session of Ambition & Avarice
Posted by Tenkar at 1:33 PM