I Was Lost, Now I'm Found

Well, not really lost... more like sleep deprived and stuck at work.  I went to work as usual around 715 Thursday morning and didn't leave until 1115 Friday morning.  No naps, no dozing.  28 hours, nearly 11 of which were cash over time.  It is, most definitely a beautiful thing, but it does take some time to recover to a normal sleep schedule afterward.

It did get me thinking about D&D, adventuring parties, and how far they could push themselves before succumbing to the need for sleep, the penalties for sleep deprivation and ways to combat those penalties.

I found that burning anger at a co-worker that wasn't around to unleash at was better then any caffeinated beverage ;)

I also paid close attention to the ebb and flow of my energies and alertness.  Once I rolled around to 6 am on Friday I found some renewed energy... probably because that is around the time I roll out of bed on workdays.

I'm going to be looking closer at sleep deprivation and the Adventuring Party later on.  I'm too tired to think about it now :)
Posted by Tenkar at 11:26 PM 2 comments:

"If its free, its for me" is a bit of an on going joke on my job.  Public servants seem, for the most part, to be frugal with their money...hell,  they're damn cheap.  We're  in it for the pension, not to make it rich.  So if you can pinch some pennies, so much the better.

RPGNow is running a Read an E-Book special for the next four days or so.  The vast majority of the 1000 plus free downloads were free before, and will be free afterward, but there are gems to be found.  One is White Wolf's World of Darkness Rulebook.  I might not play with the Storyteller system myself, but if it's free, it's for me ;)

I've yet to find an RPG product that can't be strip mined for another system.

As most of those that follow this blog know, I'm big into E-Books and E-Book Readers, so this promotion is pretty interesting to me.
Posted by Tenkar at 7:14 PM No comments:

Adventure Games Publishing, James Mishler's RPG Company, has ceased publishing.  This is truly a shame, as James' work on the Wilderlands of High Adventure for Castles & Crusades was top notch.  I would know, I was one of the early subscribers to his proposed line of products.  Regretfully, what James planned and what was finally produced never really worked as planned.

His planned, extremely ambitious for a one man show, monthly releases, lasted two products (high quality products mind you, both in production and in usability).  Small releases followed.  Credit for those early subscribers, and how to convert the credit into the newer products was decided upon.

In the end James aimed extremely high.  He missed his target, which I'm not even sure was attainable.  If you have to ask your readers and customers to donate money so you can buy a paper cutter, that is a good point to probably re-evaluate your business model.

I have no words of wisdom via 20-20 vision to suggest what James could have done differently for a different outcome.

I mourn the failure of a endeavor by a talented man, who gave the OSR and roleplaying in general extremely useful and professional gaming material.  Maybe not so much failure, because I do own his early successes.  Potential unfulfilled instead.  A shame.

James, I wish you the best in whatever career move presents itself to you, now and in the future.  Maybe, when things sort out, you can again share your vision with us.  On a pace that best serves you... no AGP, not your readers... you.

Email ThisBlogThis!Share to TwitterShare to FacebookShare to Pinterest
Labels: AGP, Castles and Crusades 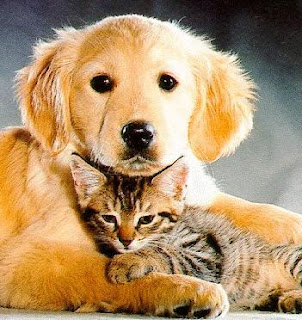 For the first time in... forever... I did a whole lot of nothing this weekend. When I say "nothing", I'm comparing it to the "two 4 hour shifts of driving lessons for my son, shopping, trip to my folks' place in the Poconos for even more driving lessons for my son, trips to the girlfriend's side of the family (aka: more driving lessons for my son)." This was a very nice, low key, snuggle up and watch TV and walk around the park kinda weekend.
Except for the dog / cat interaction that was worked upon. See, the girlfriend is a dog person, I'm a cat person, and trying to get the two pets to interact is full of trials and failures, but each time gets closer and closer to working it seems. My little girl Ashley does the avoidance method, but then can't help but checking things out as the day goes on. She is curious. Chloe (my g/f's little long haired Dachshund) likes to act all big and intimidating, but the truth is she is a pussy cat at heart.

Calls to mind the Old School / New School chest bumping that's been going on recently. I'd like to think it will resolve itself as a "can't we all get along" and "the differences is what makes us so special" as opposed to "typical dogs and cats". 'Cause dogs and cats aren't that typical.
Posted by Tenkar at 10:37 PM No comments:

Email ThisBlogThis!Share to TwitterShare to FacebookShare to Pinterest
Labels: random thoughts
Newer Posts Older Posts Home
Subscribe to: Posts (Atom)
Tenkar's Tavern is supported by various affiliate programs, including Amazon, RPGNow,
and Humble Bundle as well as Patreon. Your patronage is appreciated and helps keep the
lights on and the taps flowing. Your Humble Bartender, Tenkar