Part III of the series of posts describing the 16 games in the Tavern's current poll. 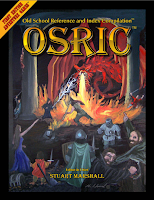 OSRIC - OSRIC™ represents a compilation of rules for old school-style fantasy gaming. The book is intended to reproduce underlying rules used in the late 1970s to early 1980s, which being rules are not subject to copyright, without using any of the copyrighted "artistic presentation" originally used to convey those rules. (one of the "grand-daddies" of the OSR, OSRIC is AD&D 1e via the OGL - free download available) 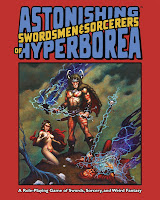 The heroes of a HYPERBOREA campaign delve the mazes and labyrinths of vast dungeons filled with horrifying monsters, lethal traps, and bewildering puzzles. They explore savage frontiers, breach hostile borderlands, probe ancient ruins, and investigate cursed tombs. They plunder for treasure and magic in a decaying world inhabited by bloodthirsty beasts and weird, otherworldly beings. (Popular game in the blogosphere with some very vocal fans ;)

Delving Deeper - The Delving Deeper RPG closely emulates the rules of the earliest version of the world’s most popular roleplaying game. Go back to a time when every weapon did d6 damage, clerics could cast no spell at first level, only fighters could use magic swords, and if you wanted a locked door opened you had to bash the thing in!  It is difficult to imagine in a world where multiple, weighty tomes comprise the rules; but this single, small book contains all you need to build a campaign that can span decades of real time! (An interesting take on OD&D) 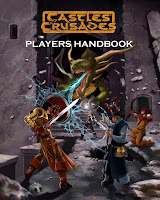 It's easy to learn attribute-based rules system allows players to choose among 13 archetypal character classes and 7 races to create their characters. Spells, equipment, fast-paced combat rules, and all essential information needed to play a game of Castles & Crusades is in this book. Further, the attribute-based rules system allows Castle Keeper's to design and run adventures as they see fit, without all the crowded, complex rules of other role playing games. (probably the best supported game of anything on the list, it's also the game that brought me back to RPGs)
Posted by Tenkar at 6:35 PM