I just did a 90 minute Intro to Labyrinth Lord / Advanced Edition Characters and Fantasy Grounds 2 for a few friends and I can already tell its going to be one hell of a game when it gets rolling ;)

We used Skype as we've all been friends for anywhere from5 to 25 years or so... no awkward silence, just many bad jokes told by all.  It was nice seeing guys from my old weekly face to face game from 13 years ago slinging virtual dice as they created characters.  So far we have a Cleric, a Fighter and a Thief.  I think our fourth player is going to be a Ranger, so they may be magic poor, but I'm sure they will cope fine.

I'm going to need to sit down and rewatch Xorn's amazing FG2 tutorial videos.  Especially if I plan on using some of the LL modules that are out there.  A few hours of prep time will speed the game up many times over.

ze bulette has a valid point about my idea to review some of the VTTs out there, or at the very least give a comprehensive overview of what is available.  Consider the challenge accepted.  It will start appearing on this blog on a fairly regular basis, perhaps as early as Monday if I get lucky ;)

Tomorrow is a six hour round trip to pay my respects for 15 minutes at a former co-worker's wake.  Thank God my kid can drive :)
Posted by Tenkar at 11:45 PM No comments: 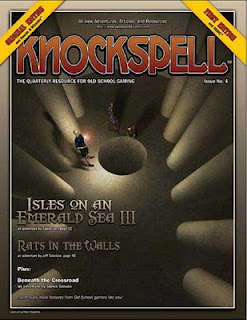 Ah, the joys of electronic publishing and instant gratification for the consumer. I caught the post at The Society of Torch, Pole and Rope last nite that Knockspell 4 was released.  Minutes later it was mine to hold.  Well, maybe not literally hold, but virtually hold.

Then I promptly  went to sleep.  What can I say?  I had a long day.

Tonight I've flipped pages... okay, I've scrolled thru the magazine and it appears to be quality as always.  That being said, my eyes were drawn immediately to the article reporting on Online Gaming.  Play by Post, mail, blog, Google Wave, chat, VTTs.  Sorry, but a bit of a disappointment.  I know its billed as a quick overview, but I really wish there had been a mention of more of the Virtual Table Tops that are available.  Half the article dealt with VTTs and was pretty much... well, not much of anything.  It centered on OpenRPG with a throw away mention of Fantasy Grounds.  I guess this is something I could write up myself for submission to one of the mags.  I've toyed with at least a half dozen of the VTTs out there ;)
Posted by Tenkar at 8:44 PM 1 comment:

Jeff over at Jeff's Gameblog has critters that were rejected from the Fiend Folio. For something to fail the Flumph test it has to be good. Go ahead, check it out. I'll be here when you return...

Anyhow, I was / am one of the Charter Members of Monte Cook's Dungeon a Day. Kinda haven't been to the site in a while, what with all the goodies elsewhere on the web. Went back today and the first 4 levels are available in PDF format, free to current Charter members. Sweet!

I'm trying to decide what to run when my Fantasy Grounds 2 / Labyrinth Lord game gets off the ground. Convert some C&C mods, convert Dungeonaday or run with Stonehell. Decisions, decisions.

Well, the first session or so will be the Tomb of Sigyfel I think. Nice and short. Should work well as a reintroduction after a dozen years out of the game for most of my players ;)
Posted by Tenkar at 7:22 PM No comments:

Ack! I guess you want a bit more then that. First things first, I'll be referring to the pre-release Dresden Files RPG PDFs here. Yes, they look awesome. Not suitable for printing as the page background has a graphic to make the pages look yellowed: it's a nice effect but an ink waster. Then again, at over 400 pages who the hell plans to print out the PDF? I'll happily wait for my dead tree copy to arrive.

The book is presented with fake handwritten notes from the game designer, "Harry" himself, and a few others. Very entertaining and they offer a nice inside glance into the system. Some might find it distracting I expect, so know your own tastes in this one.

I've made it up to (i've begun reading but far from finished) Chapter 3. This is where the group decides on and designs the city the campaign will take place in. Interesting twist as this is done before generating characters. Baltimore is the default if your group doesn't want to go through the process and it is provided as an example.

Alright, that's as far as I've gotten so far. More soon. Remember, you can get a free preview here.
Posted by Tenkar at 8:05 PM No comments:

Get Savaged for Less

With Pinnacle's fairly liberal licensing scheme for its Savage World's rule system there has been a proliferation of Savage World's compatible releases. It a way its almost like the D20 explosion, but this one is mostly (thus far) PDF in format.

Some publishers have gone as far as giving a good chunk of their products away as a free preview. I'm not talking a dozen or two pages, more in the range of 60+. Certainly enough to get an idea if the book full bok is right for you, and a great way to borrow and steal freely available material for your own campaign.

Interface Zero (Savage Worlds edition), Players Guide Beta test From Gun Metal Games is the first 3 chapters (over 60 pages) of cyberpunk for your Savage Worlds gaming. Your character generation rules are here. Also works well as a Player's Character Creating Guide so all the players aren't looking over the GM's shoulder.

Savage Suzerain Play Now, For Free From Savage Mojo is nearly 100 pages. For this I'm gonna borrow in the publisher's own words:

Not sure whether you want your characters to be a pantheon in the making? Before you invest in some major gaming pleasure… Product Contains: A 98 page full color, hi-resolution PDF. It is a large download file and art intensive. Inside are 24 pre-generated character sheets for six characters at four power levels, plus all the universe background and game rules needed to play those characters at any of the power levels. There’s also a detailed description of how those characters were made from our resident Savage Worlds guru, Alan Bundock and five One Sheet adventures to get your GM started.

Not too shabby for the gamer on the budget.

Then again, there's the game I've been waiting for for ages, and I've already plunked 90 bucks down for the dead tree / PDF preorder (and its not savage Worlds, its Fate / SotC):

The Dresden Files RPG Preview: Nevermore From Evil Hat Productions, LLC. If you've read ANY of the books in the Dresden series you'll know why this excites me. If you haven't, you owe it to yourself to start. I already have the PDFs from the preorder... the 2 books combine for some 900 pages or so... time for me to take a week off sick from work to start reading. ;)
Posted by Tenkar at 10:48 AM 2 comments:

Email ThisBlogThis!Share to TwitterShare to FacebookShare to Pinterest
Labels: Free RPG, PDF
Newer Posts Older Posts Home
Subscribe to: Posts (Atom)
Tenkar's Tavern is supported by various affiliate programs, including Amazon, RPGNow,
and Humble Bundle as well as Patreon. Your patronage is appreciated and helps keep the
lights on and the taps flowing. Your Humble Bartender, Tenkar