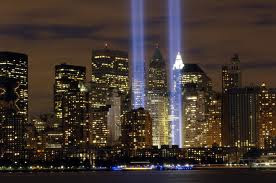 I tend to keep most real life events off of this blog. It's a gaming blog, not a news blog, political blog or life recap blog. 9-11 is one of the few exceptions to my unwritten rule.

That day literally redefined my life. I lost a close friend. I witnessed with my own eyes and ears both towers coming down. I heard screams over my police radio that I will take to my grave. I thought I was going to die that morning, and I was at peace with that. Years later, when I was diagnosed with cancer and thought it was possible I might only have six months or a year to live, I curled up in a ball on the floor and cried like a baby. Cured now.

When I came on the Job back in 1996, we were told the only heroes were those that made the ultimate sacrifice. We were told not to be heroes - be brave, but not foolhardy. 9-11 redefined that definition for me. The heroes that day were not only those we lost, but the common man that shouldered a burden that wasn't his, but decided it was the right thing to do.

The homeless man and the Wall St. banker directing traffic on Houston Street and 2nd Ave as I raced the police van from the South Bronx to Lower Manhattan. Shopping cart full of one man's total belongings propping up another man's suit jacket and brief case.

Local grocery stores emptying their shelves of food and water to feed the now gray colored police and firemen after the towers fell.

Watching the long lines of people walking over the Brooklyn Bridge to the far side, and other masses of people heading north up the middle of the streets. Seas of people supporting each other. Color, race, creed, orientation - it mattered not at all as folks came together for the common good. The worst of times brought out the best in people.

There are lessons in that day. In our communal loss we still have much to gain and learn.

Email ThisBlogThis!Share to TwitterShare to FacebookShare to Pinterest
Labels: 9-11