Of Racial Classes and Mundane Spells 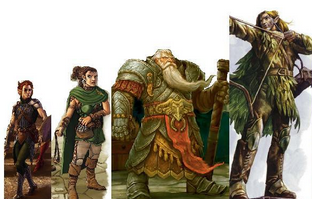 The first two are what we see most often in the OSR. "Class as Race" is the OD&D through BECMI method, where if you were anything but human, your class was decided by your race.

Racial classes are something I've rarely seen. Adventurer Conqueror King System uses the method for it's non-human races. Class options for non-humans are limited to racially specific classes. These classes often have aspect of one or more "human" or normal classes, but they are unique to each race.

I'm working on a project dealing with"racial classes". We'll see how well I can nail it (or not). A side result of this has been the more mundane spells that I've been coming up with. They certainly aren't specifically pegged to one race or another, but they are useful in helping flavor some of the classes.

I suspect there will be many more mundane spells making their way to the blog (and probably more Racial Classes too).
Posted by Tenkar at 4:48 PM