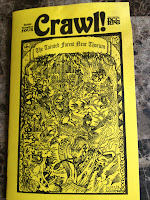 Crawl! for those that don't know, is a print only fanzine for the DCC RPG. Issue #4 of Crawl! is even more special then the previous 3, as it's actually an adventure. Yep, for $3.50, you get an in print DCC RPG adventure with detachable cover and artwork by Scott Ackerman. You don't know who Scott Ackerman is? Look at my blog header above to see some of the amazing work he does. Yep, him. Art AND cartography for The Tainted Forest Near Thorum.

As for the adventure itself - it's a 5th level adventure with both outdoor and indoor locations, so there should be ample opportunities for role playing and head bashing. When it comes down to it, that's what RPGs are all about ;)

It should be a fun one to run and play, assuming I ever get a party up to level 5 in the DCC RPG. One word of caution - there is a fairly powerful weapon that the party will probably acquire - because as we know, players would rather kill than talk. Depending on the type of campaign you are running, you might want to tone down some of it's power. You'll know it when you see it.


The 4th issue of Crawl! is an adventure module by Yves Larochelle and art by Scott Ackerman. It features:

A complete adventure for 4 to 8 5th-level characters!

A detailed village full of interesting locals but with a hidden secret!

A nearby forest full of unique beasts including a dragon!

A deadly dungeon with a sinister evil!

Plus new magic items and more!

This adventure can be played in its entirety, or bits and pieces can be used on their own, including a random forest encounter table.
Posted by Tenkar at 5:21 PM