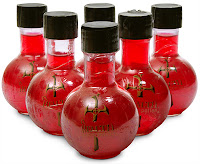 I originally wrote this 3 years ago, but it certainly fits in well with DCC and the other OSR style games making the rounds these days.

Daev's Healing Draught has the look and taste of a normal healing potion, although the astute drinker may notice the aftertaste is reminiscent of cherry wheat.

Game effects are much like the normal healing potion according to your game rules, at least as far as the character is concerned. Wounds are apparently healed, bleeding stops, bruises seem to fade, pain lessens, etc. In truth these are but illusionary gains... the character suffers no ill effects from his current wounds until he takes damage equal to the amount "healed", at which point all the illusionary healed damage is again in effect for the character in addition to the new damage. This could lead to a warrior still fighting when he should be unconscious or dead, let alone said warrior suddenly dropping dead as new damages causes the illusionary healing to cease it's effect. The illusionary healing fades in 24 hrs, again returning the character to his correctly wounded state.