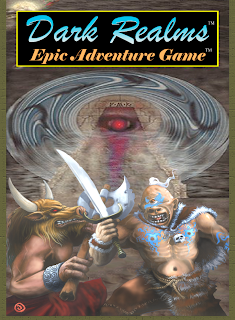 I've stumbled across a handful of Kickstarters over the last year that have left me scratching my head. Some were poorly done, some poorly presented, some made no sense, some aimed to high - but they all made me look closer to try and figure out what the real faults were. This will, I suspect, become a fairly (ir)regular feature at the Tavern.

This time I'm going to take a look at Dark Realms RPG 1 Million Book Give-Away. Right away you can tell it's ambitious. Match that to the $45,000 goal for a company's initial Kickstarter, let alone in the RPG niche, and it raises some questions.

They answer the first question pretty well - how the hell are they going to give away a million of anything with $45k dollars? They aren't - they are aiming at 250K in the first round of funding, and publishing the free RPGs on newspaper quality paper. Interesting.

The second question is an obvious one too - what the heck is Dark Realms, and why should it be able to gain $45k in pledges and 250k RPGs distributed. This there is no easy answer. Apparently Guild of Blades (the publisher) has been around since 1994, I've just never heard of anything they've put out, let alone the game they are trying to raise $45k for.

How is the game? You can grab the PDF for free, but the link on the Kickstarter page is far from helpful, as it send you to their web store to buy it in print (direct link to download Dark realms here). Yeah, I know that's not an answer - so maybe this will help:

As a function of the Dark Realms game system, each core attribute a character has is also assigned an “Adjustment Value”. The Adjustment Value is used to determine certain combat and mental capabilities as well as potential bonuses the character might receive. They “adjust” a good number of features about the character.


I hope you followed that. It left me with some more head scratching.

Why would I want to put a million copies of this game out there? I guess because it uses a singe D6 and has a simple resolution system. That's about the only simple part. Here's the rules on dual wielding:

Typically this is something few people can do and even few
people can do well; but there is nothing stopping one from
trying, even if it is often unwise. Without the Ambidexterity
skill, the following penalties apply when wielding more than
one weapon:

1) Both weapons being used must be single handed weapons.

2) The larger of the two weapons will be considered to be
held by the character’s dominant hand and be the “primary”
weapon. The other weapon will be the secondary one.

3) The character gets a -1 to Dodging. This is in addition to any
Dodge penalties that would apply from each weapon.

6) Yes, if they have 3 or more arms, there can be multiple
“Secondary Weapons”.

7) The character receives no Weapon Mastery bonus they
would otherwise recieve with both of the weapons being
used.

When a character has the Ambidexterity skill each point in this skill reduces one of the penalty points to each weapon otherwise given to Initiative and Attack Levels. Additionally, at Level 1 with Ambidexterity the character no longer receives the -1 Dodge penalty.


This is not an introductory RPG that someone is going to pick up and run for their friends if they have no prior RPG experience despite what the publishers feel to be the case.

The publishers have a laudable, if unrealistic goal (it's been live for a few days, and currently has 4 backers for $138). This isn't the product that's going to make a $45k goal. $4.5k would be highly doubtful.  It is a curiosity none the less.