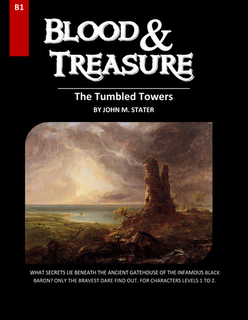 If you're like me, you've taken an interest in John Slater's Blood & Treasure RPG. John's put out an introductory adventure for B&T, The Tumbled Towers. It's available for free in PDF, or you can grab it in print from Lulu.

It's a nice little adventure to kick off a campaign. Random outdoor encounters, random dungeon encounters and some potential role play encounters in addition to the usual dungeon adversaries. It's definitely old school in nature - where else would you find Shriekers and Violet Fungi? ;)  If you steal nothing else, grab the blue tone (classic TSR) dungeon map. It's very well done.

If you want to can a peek at Blood & Treasure without dropping your hard earned cash, look at the pre-gen characters in the back of the adventure. There are 12 and a blank character sheet.

Personally, I'd give maximum HP at 1st level, as these appear to be given average HP (except for the Bard, who has the Toughness feat to help balance out his -1 from his Con of 7).

In any case, the price is right and with little work this could be used in any other OSR style game.