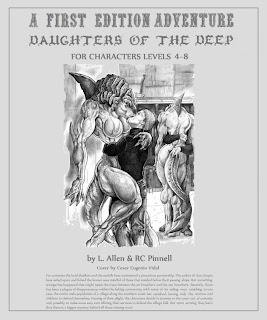 Daughters of the Deep is an OSRIC / 1E adventure for characters of level 4-8.

First things first - it is extremely well written. Really nicely done, which is why it's a shame that the layout is just awkward. It really should have used a 2 column format for the adventure, as it would have made things much easier to read and follow, at least at this font size. Minor quibble maybe, but I did find it annoying. YMMV.

It is apparently designed for use with the supplement Sea Maidens of San Gropia - which I've never heard of and couldn't find at OneBookShelf, but it certainly isnt needed (that being said, it would be nice to know where one can find the product that this was made to be run with). Daughters of the Deep runs fine on it's own.

Getting your party to the location shouldnt be an issue if you can drop it into your setting. The Village of LaMounte has enough detail for the party ro spend some time getting to know it, without so much that they will tire of getting to know it. It's there to give them the background of the events that are going on, and picking and choosing what you want to feed the party from the rumor table works better than random rolls in my opinions this time around.

The adventure itself is a nice one and should be a challenge to most groups. My singular issue, and this is shared with most any adventure that deals with "water locations" is that without supplying the party with the appropriate water breathing methods, they are damn near completely hamstrung. Yes, the adventure tells us how to overcome that, but it feels forced when ever i read an adventure that requires time in the water. Ah well, pet peeve of mine, and it doesn't distract from an overall excellent adventure that was the party seeking a solution and not just a body count.


For centuries peace has existed between the fishermen of San Gropia and the local sea beings. But something has happened, and that peace is threatened. There has been a recent plague of disappearances among the fishermen within the coastal communities; the men have slowly disappeared! In one village along the southern coast, the entire male population has vanished, leaving only the women, young and elderly to defend themselves. Hearing of their plight, your little group of adventurers decides to journey to the village, out of curiosity, and--perhaps--to gain a few gold pieces. But, upon arriving, you find there is a greater mystery behind the missing men; the strange behavior of a local lad, and hints of an angry god.

Designed for 1st edition games and experienced players with characters levels 4-8, it can easily be adapted to most RPG rules systems. (Some of the material briefly mentions certain biological functions pertaining to females, but is not gratuitous)