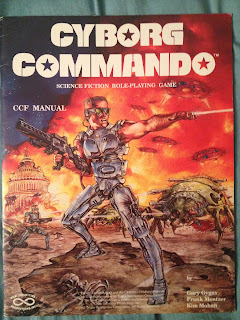 I did some cleaning earlier tonight and found my copy of Cyborg Commando. You know, the game Gary Ggax, Frank Mentzer and Kim Mohan put together when Gary was booted for TSR.

I still have the original, oversized zip lock bag it shipped in.

I never played it.

Never even tried to convince my players back in '87 to play it.

So, my idea upon finding it was that I'd read the rules for the first time in 25 years and run a session on G+ as a goof.

Ain't happening. I can't do it to myself. I tapped out flipping through the rules.

There's too much good stuff out there, old and new, to drag crap like this out again.

If I ever ran a Mutant Future game, there might be something usable in the campaign book, but that's far from the top of my list of games to run or play.

Somethings get better with age, and others stink just as bad or even worse then before.

The cyborg still stinks.
Posted by Tenkar at 12:28 AM