Temple of Elemental Evil - Still the Best MegaDungeon Around? 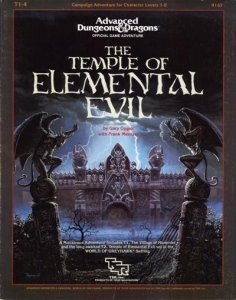 If I had a problem with most of TSR's earlier adventures, it's that they were tournament modules poorly converted for campaign play. I of course did not fully understand the problem at the time, in large part because the only commercial adventures I had were from TSR.

Then T1-4 was published (which I found to be strange numbering, as I had only previously seen T1 - The Village of Homlet).

The Temple of Elemental Evil changed my gaming style for a long time. Simply because it was pretty awesome.

TOEE had a village for the players to base themselves in. It had a dungeon that they could spend months adventuring in. They had to deal different factions within the temple - they could align with one faction against another, before breaking the alliance (or having it broken on them). The stand alone map booklet was many layers of awesome. For all intents and purposes, it was a stand alone campaign with a suitably climatic ending with purpose and value.

I ran it at least 3 times to conclusion.

I haven't found a megadungeon to match it - yet.

Stonehell does what it does well and Barrowmaze is currently giving my ACKS party a damn fine change from the sandbox above, but have I missed the next iteration of ToEE?

Heck, how about a list of OSR / Old School MegaDungeons?
Posted by Tenkar at 8:11 AM

Email ThisBlogThis!Share to TwitterShare to FacebookShare to Pinterest
Labels: megadungeon