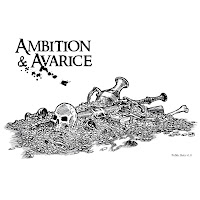 Hey, I can finally freely talk about Ambition and Avarice ;)  See, I game with the game designer of A&A, and he's bounced bits and pieces off me for a few weeks now, and I've played in two play test sessions so far. What can I say about it? Simply that I want to come back for more.

It has the comfort of being the game you know, with the twist that it isn't quite the game you know. Hit Dice size is based on race, not class (except Rangers get to step the die size up by one). The spell list is NOT the one you are sued to from nearly 40 years of D&D playing, but the magic is still pretty much Vancian in nature. The spells themselves? Mostly pure gold. Well, at lest the first level spells that are included. This is the free beta release and there is surely more to come.

I like the idea that everyone can be "thiefly" in nature, but some are just better at it than others. Non-casters (mundanes) get the addition of character points, which can be used to increase HP beyond the rolled HP total, to make one better at dungeon skills or saving throws and even the chance to hit. Customization is a sweet thing. Casters get to customize via their spells, but much like LotFP's Weird Fantasy, they won't be getting better in combat or skills or even saves. Interesting way to work out a balance between the meat shields and their magic casting buddies.

I've played in two sessions thus far - and I have a 2nd level Dwarven Priest and a Hobgoblin Knight. Yep, the humanoids and demi-humans get to mix ;)

There's a crapload more to Ambition & Avarice  than what I just discussed above, but I'll address that in a follow up post.

BTW, the PDF is formatted for Tablets / onscreen reading and has basic bookmarks, so it's prefect for reading on your iPad or Google Nexus ;)
Posted by Tenkar at 5:29 PM

Email ThisBlogThis!Share to TwitterShare to FacebookShare to Pinterest
Labels: free game of the week