In honor of Talk Like a Pirate Day, I present to you: 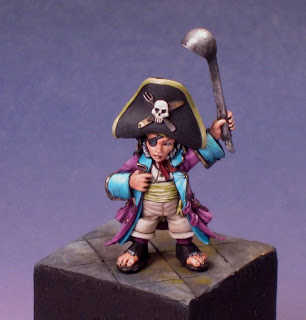 'Orrible Otley is a self declared "Land Pirate", possible the only such one in the lands. During his travels he "found" a Pirate's Hat and deciding that as hats make the man, or halfling in this case, he  would become a pirate. Which would have worked fine, except that he disliked the sea, hated boats and had swimming skills to match that of an average dwarf.

So it was that "Affable Otley",  occasional adventurer and purloiner of fine goods became "Oribble Otley, fiercest Land Pirate the Lands had ever seen. Most folks humor him as if her were a child in costume, which is fine by Otley, as it gives him ample opportunities to acquire items from those that are otherwise distracted.

'Orrible Otley is personable and entertaining, with a wide and varied repertoire of pirate stories to entertain folks while using his best pirate voice. "Ahhrrr!!!"