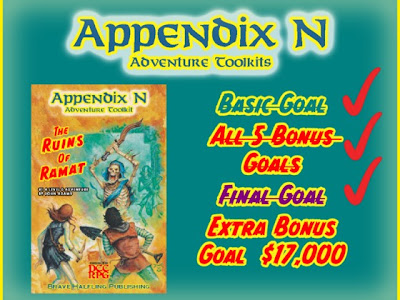 As I write this, the Appendix N Kickstarter for the DCC RPG has less then 40 hours to go and an extra stretch goal after reaching what was thought to be it's final stretch goal. Yes, it's getting that much support.

Still, I think I should break down what you get with your pledge, as Brave Halfling is giving the best value on the gaming dollar around. Even if you don't play the Dungeon Crawl Classics RPG but one of the OSR clones, I'd still tell you to jump on board.  The deal is just that good.

Get some friends on board at the price becomes less than the price of a pizza pie ;)

I'm going to start with a pledge of $20, as this gets you a single copy (signed and numbered) of all the stretch goals in print in addition to PDF where applicable:

Appendix N Adventure Toolkit #1a: “The Witch of Wydfield” (No PDF Ever for this one)

DAGGER RPG: A Referee Screen for Quick and Simple Role Playing with Young Children (when the final goal is hit)

All the above comes with with a $20 pledge.  An amazing value.

A pledge of $100 gives you 5 copies the above Appendix N Adventure Toolkits AND the first 8 Appendix N Adventure Options pdfs. ($101 gives youthe opportunity to design and name a major monster, npc or location (1000 words or less) in an Appendix N Module with full contributor credit listed on the title page! - I'm in at this level)

There higher pledge levels, but I think you get the idea ;)

I'm in at the 5 print copies level of $101.  I will be giving away at least 2 copies every month of the Appendix N Adventure Toolkits (1-6) as I receive them via different contests on this blog. My way to give back to the DCC and OSR community.