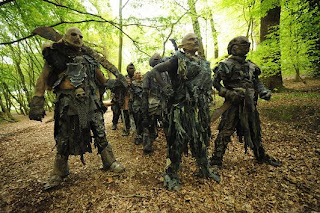 I have an ongoing joke.  Alright, less a joke perhaps and more of an interesting observation.  Every RPG session has an incident that either involves torture, fire or both in which the party are the instigators.  Actually, maybe not every session, as I don't think it happened in last Mondays DCC RPG Funnel, but if so, that would probably be the first time this year for a game I've either run or played in.

Last night in the weekly ACKS campaign I run, there wasn't even foreplay (maybe the wrong word to attach to torture, especial with the winds that are blowing through the RPG social media corner, but whatever) before heads were lopped.  Wait, I'm getting ahead of myself.

After the party finished shaking the village down they had arrived in 2 sessions ago for funds to pay for a "removed curse" on the poor villagers, the party made their way to the ferry to get them across the river.  Passage can get expensive when the party includes mounts and pack bearers (note to self - pack bearers are wilderness targets too).  Shortly after they crossed the river, they encountered an old man being chased by orcs.

Three sleep spells later (as the orcs were spread out) there were five sleeping orcs.  The old man was debriefed and than four ors were summarily dispatched.  Wait, let me rephrase that for accuracy.  Their heads were removed from their sleeping bodies and placed in front of the still sleeping leader of this small orcish squad.  The party's NightBlade named Vesper (a thief / magic-user combo class that leans towards assassin) made sure the leader was lying on his stomach and then got on the orc's back before waking him with a knife to the throat.

Besides the "overkill" in more ways than one, seeing my men's heads placed in front of me when I awake with a knife to my throat wouldn't leave me with thoughts of a long, productive life ahead of me.  I made a moral check (with a bonus to it for his killed men) for the orc leader when the party started asking him questions.  He answer in fairly accurate yet vague riddles.  Vesper "The Beheader" promptly removed an orcish ear.

The Jack Bauer method of interrogation is not the most effective. The orc refused to talk.  More accurately, he refused to answer questions, but he had no problem voicing his opinion.  At which point the party's magic-user cast Charm Person and made an instant friend - who almost immediately asked if he could kill Vesper.

So, literally in the first encounter we had fulfilled my expectations. Another tally mark in the torture column. No one got around to using fire this time around, but we were one hell of a distracted group, starting the session with a social media debriefing, two guests dropping into the session (one a regular player that couldnt make full session and Josh, the lead programmer for Table Top Forge). Not much was accomplished story-wise, but it was certainly a full session.
Posted by Tenkar at 9:57 AM