You are Attacked By an Ist Wielding the Power of Ism 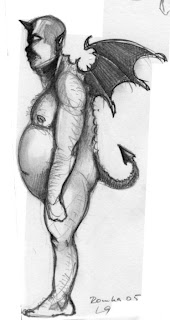 There is nothing that drives sane adventures to run screaming for their lives and sanity like the appearance of an "Ist".

Sadly, you can't avoid the Ists.  They are everywhere, and if you are not one of them, they will attempt to use their "Ism" power to make you appear to be an "Ist" of their opposite alignment.  If successful, the "Scarlet I" appears on the victim's forehead, forever marking them as False Ists.

False Ists do not have the power to mark others, but become the frequent targets of others Ists. Short of killing the Ist that marked the False Ist, the only way out from under the curse is a Remove Curse spell cast by a high level Priest of Reasoned Thought.  The priesthood is constantly under attack by all sorts of Ists, and it is a rare priest that survives long enough to attain the power to remove this type of curse.

ACKS Stats For the Average Ist

% in Liar - 100%
Dungeon Enc: 1-4 (Often Appear in Mated Pairs)
Wilderness Enc: 1-10 (Referred to as a Swarm)
Alignment: Varies, but always extreme
Movement: 30' - If you start running upon sight of an Ist, you should be able to escape
Armor Class: 10
Hit Dice: 8 (but gets to heal using DnD Next HD Rules)
Attacks: 1
Damage: Special (As detailed above, with collateral damage to reputation)
Save: T12
Morale: +1 (+1 per additional Ist in group)
Treasure Type: Nil
XP: 10,000 (which is the reason adventurers are foolish enough to engage an Ism on sight)