How Far Can You Go in the DCC RPG in a Day? 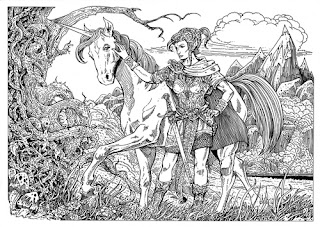 I've never been totally satisfied with the rates of travel in OSR games.  They always seem to assume straight roads, perfect passage, no distractions and little worry about where the part ends up at the end of the day. Sleep in a filed, just of the road, at an inn - none of it seems to be included in how far the party can travel. It irks me to no end.

Then we come across the following passage in the DCC RPG rulebook. I happen to think it is simply the best write up of travel in a medieval fantasy setting that I've seen so far: (page 307)

Low-level heroes, bereft of wealth, travel on foot or as passengers in farmers’ carts and caravans. As they advance in name and station, they may acquire donkeys, ponies, or even great steeds to carry them. Here are a couple important points to remember

First, travel is dangerous. When a man goes beyond the reach of his lord’s cavalry and sheriff, he is on his own. Even in “civilized” lands, brigands accost wayfarers. The knights of neighboring duchies may harass mercenaries. And of course there are monsters.

Second, travel is rarely direct. Especially at lower levels when characters are paying passengers on caravans, there is business to conduct other than the PCs’. The caravan makes stops wherever it can sell or acquire goods. There may be other passengers with destinations involving religious pilgrimages, visiting relatives, or special errands. There are places to avoid: dangerous aboriginal tribes, barons charging egregious taxes, and regions superstitiously labeled as “haunted.”

Third, travel is not easy. A city may have a few cobblestone streets, and a great kingdom may have a paved King’s Road. Otherwise, travelers mostly follow muddy roads, tracked lanes, footpaths, and dry stream beds. A day’s travel may end several hours shy of nightfall, “wasting” good travel time simply because the next inn is too far to reach before dark.

Why is it that much of the "flavor rules" in the DCC RPG apply so well to other RPGs in the OSR?

As an aside, the players in my initial DCC RPG Arc, who suffered through a game that was probably a weird AD&D / DCC RPG hybrid as I defaulted to AD&D rules when I had the smallest doubt, are still basically penniless. Well, maybe not "dirt poor", but they are still pretty poor none the less.

Which of course leads to a whole 'nother blog post topic - when mundane items become like magic in the DCC RPG. With luck I'll get to that later today ;)
Posted by Tenkar at 1:43 PM