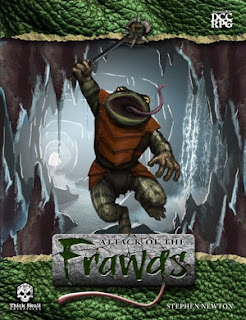 It appears like Joseph Goodman found his lightning in a bottle with the Dungeon Crawl Classics RPG. Not only is the core rulebook a tome of much awesomeness, but the adventures from both Goodman Games and the Third Part Publishers have been strong right out of the starting box.  Attack of the Frawgs from Thick Skull Adventures is no exception.

Surprisingly, this is no dungeon crawl.  It is man versus beasts in the Wilds around Dead Goblin Lake.  Yep, Attack of the Frawgs is primarily an outdoor, or dare I say it, wilderness adventure. I had assumed both by nature of the name - Dungeon Crawl Classics - and the first few adventures from Goodman Games that dungeons were going to be the be all.  Thankfully, they are not.  There is a place for wilderness adventures in the DCC realm of adventures, but they are plotted out similarly to dungeon adventures in the DCC system. I suppose this makes sense, as experience is earned by "encounter", not by enemies felled or gold found. I do like the DCC experience system, but that's a topic for another post.

The adventure itself looks to be a fun one.  I like the idea of townsfolk rising up to protect their own against evil invading their lands and lively hood.  I'm also pleasantly pleased with how well the wilderness adventure appears to plot out.  I'm very tempted to run this in tomorrow night's game with my party of newly levels 1st level PCs.  I guess I'll figure that out before game time ;)

The cover art is great, the interior art is fine and the maps are very serviceable.  The maps aren't like those in the various DCC Adventures from Goodman Games, but they are easy on the eyes and following them is a breeze (as great as some of the Goodman maps are, I think I get distracted at times by all the shinnies and following them can sometimes be confusing - not complaining - I love them - just sayin').


Attack of the Frawgs is an excellent addition to the DCC assortment of adventures.


When creatures prey on the innocent, the meek must become the hunters!


Panic is mounting in the isolated settlement of Sagewood! Frightened villagers speak in hushed tones of “walking frogs the size of men” peering at them from within the woods. And now, a severely wounded local trapper has barely managed to return from Dead Goblin Lake; the fate of his partner known only to the foul creatures that so savagely attacked them.


In a small village without heroes, the townsfolk look desperately towards each other for salvation from this terror. Those who face the creatures will almost certainly pay with their lives...


Are you brave enough to risk it all?


Attack of the Frawgs is a Dungeon Crawl Classics Role Playing Game adventure designed for 8-14 0-level characters or can be easily adapted for use with 1st-level characters.