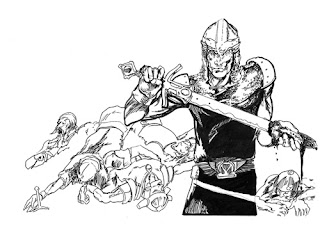 I never realized how many options there were under The Mighty Deeds of Arms.  It's a real, tangible boon for the warriors in the party, and allows for many combat maneuvers one would expect from a Swords & Sorcery type game (which covers a large part of Appendix N).

The warrior needs to successfully hit AND score a 3 or better on the Deeds Dice Roll (the die starts as a D4  D3 and increases as the warrior levels). There is little reason to NOT try to achieve a Mighty Deed.

What kind of deeds are available to the warrior?  It depends on the situation and the surroundings of the combat in question.  The DCC RPG rule book gives some examples, but they are far from all inclusive. (page 89)

There is no limit to the types of Deeds that a warrior can
perform. Any situation-appropriate specialized attack
should be encouraged. To help provide some general
framework for understanding the concept behind Mighty
Deeds of Arms, we have provided seven general categories
below. These are merely suggestions to give a sense of possibility
and scale.  The guidelines that follow should help the judge
decide which benefits to apply to a high deed die roll.
Creative players will certainly come up with new Deeds.
Encourage and allow this.

Blinding Attacks - with it's own chart, with the actual effect depending on how high the Deeds Roll is (is this included in the Crawler Companion app?  If not, it's a good fit)

Blinding Attacks - again, with a chart (BTW, these charts only o up to 7+ - The guys at Spinal Tap would be greatly disappointed)

Rallying Maneuvers - mostly used to rally NPCs, but can benefit allies too.

Defensive Maneuvers - sometimes the best defense is a bonus to defense.  Maybe even for the who party.


Weapon-Specific Deeds - certain weapons have their own default deed. If the warrior doesn't declare a specific deed, the default weapon deed is considered to be in effect.

Signature Deed - a warrior can set his own default style of deed.  It can be a combination of the previous deeds, or his own type.

I think some Deed Tables need to be added to the default list of seven. I may need to brainstorm some (after I do the writing I'm already committed to).