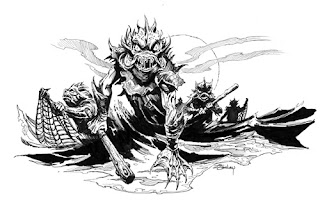 Important monsters are, for the most part in the DCC RPG, meant to be unique.  In a way, it's much like LotFP's Weird Fantasy.  Weird Fantasy also expects the monstrous to be strange and unique.  DCC is different, as there is an expectation that "mundane monsters" exist in addition to the more unique ones that operate under their own set of rules.

It would seem to me that the unwritten DCC RPG rule for monsters is "unique Big Bad Baddie, others optional" (it may be written, but I haven't found it yet).

Look at the following passage from the DCC RPG rulebook (page 383) to see what I mean:

Monsters don't play by the rules.

Why should they? Conan never knew what manner of foul
beast he would face or whether his sword would overcome
its sorcery. He feared no creature of flesh, but was justifiably
terrified by the supernatural. Monsters and magic are
not bound by the same laws that govern mortals. The creatures
that follow demonstrate examples of this fact; and you
should heed it in your own creature and encounter designs.

Spellcasters in particular, whether human or monstrous in
nature, should have powers that are unavailable to the players.
This does not mean fully defined spells of the same sort
learned by the characters. This means a unique power of
some kind that would provide a plot hook, leading the player
characters to seek out the wizard character and attempt to enlist
his services, either as a an ally, hireling, or hostage. On the
next page is a table of inspiration, but note that these powers
should not be spells. The NPC should be able to use these
powers with predictability and accuracy in a way that player
characters cannot. It is left up to you to flesh out these ideas,
which can apply to any wizard, sorcerer, shaman, witch, warlock,
acolyte, priest, cult leader, or other such figure.

Monsters don't need to play by the same rules as the PCs. In some ways, having the players realize that the BBEG / BBEM is not playing by the same set of rules that they are makes them even more apprehensive, more nervous, as they can't assume it's abilities or the limits thereof.

Something else that I can (and should) port over to my ACKS campaign ;)
Posted by Tenkar at 7:40 PM