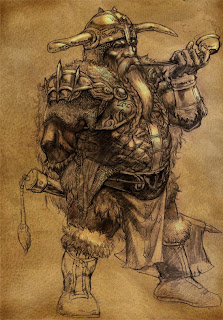 Nothing pisses off a Grumpy Dwarf more than a blog post that screws up the font, the colors and all that other shit.  So, I'm going to try using yet a different browser today.  Lets see if it fucks up yet again, shall we?


Oh, this is Mike Mearls' latest interview.  Mike can talk.  Have I mentioned that before?  Yes?  Well, I'm going to state it again.  He's like the Everready Bunny.


On June 15th, we conducted an interview over Skype with Mike Mearls, head of Research & Design of D&D at Wizards of the Coast. Also during that day, Mike was participating in an “Ask Me Anything” thread on Reddit, (Mike is a multi-tasking madman!) so some of the answers make reference to that. This interview has been transcribed, paraphrased, and edited by us from the call (so it's just the meat I suppose). We chose to mainly focus on the process of playtesting and design for D&D Next for this interview.

Critical Hits: How is the AMA on Reddit going?

Mike Mearls: It doesn’t matter how many questions I answer- more stuff just keeps showing up (which shows a lot of interest in D&D Next.  No matter how much I may biatch about 5e, I'm glad to see Mike is swamped with questions). It’s funny, I think most of the answers have boiled down to “yes, we’re giving the Fighter maneuvers, we just haven’t gotten to it yet.” Which fits the playtest feedback too, where I think 80% of the surveys said they wanted it too (which seems awfully huge, as I doubt 80% of playtesters played fighters to any extent.  Then again, most of the playtesters are probably current 4e players, and they are accustomed to front loaded options). Even players of older editions are saying that. It’s just funny to see it (is 3x older?  probably.  I suspect the further one goes back in edition preference, the lower the numbers of people that want to be loaded down with upfront power and options.  then again {yet again} when you aren't increasing the fighter's chance to hit, he needs something to show that he is progressing in levels. I think that is the main reason folks what more options and maneuvers for fighters - they simply don't get better otherwise in D&D Next) .

CH: Let’s talk about some of the new rules, like Advantage/Disadvantage (this should be interesting). When the survey responses come in, is most of the feedback focused on those new rules, or is more about the older rules that have been brought forward?

MM: It’s a mix, yeah. One of the things we did with the playtester base was to set the framework based on the questions we asked. The first thing we want to look at is the new mechanics: Advantage, action economy (i'm sure someone will define this, but it just seems like a strange phrase to me), and so on because it’s a change from what D&D has been doing the past few editions. We’re mainly taking the temperature of the room, asking “do you like this or not?” Then deciding where we want to go from there.

Healing has been one area that’s been getting tons of attention (that shouldn't be a surprise). It’s funny, if you went back to the days of 2nd edition and gave those players the D&D Next document exactly as it is now, I think people would be like “woah, there’s so much healing, I have these hit dice I can spend.” (the result would be "whoa, there's too much healing - we'll never die now!"  but i was 19 or so when 2e came out, and we were still Monte Haul back in the day, so it would have been fun for a few months.  Then we would have moved on to WFRP or Traveller)  But now that they’ve played 4th edition (this one sentence should tell you the edition segment that will have the most influence on D&D Next - and it ain't the old farts in the OSR), they’re just like “there’s not enough healing in this game.” It’s one of those things that has changed. It’s interesting to get people’s perception of what D&D “is” and see that it has changed over time (not so much changed as there are now multiple opinions out there.  that's what you get when you change editions and rule sets faster than folks change cars).

The really interesting thing is that preferred edition plays some role in it, but it’s nowhere as big of an effect as you’d think (I'd like to see a percentage of 4e self identifying players in the 5e playtest.  I'm going to guess it's around 80%.  Who wants in on the over / under?). Like, everyone loves at-will spells (because nearly everyone is a 4e player Mike.  who do you think signed up in droves for the playtest?), it’s one of the most positive things. Even players who played OD&D or 1st edition, it’s not like they’re 90% (75% maybe?  it's a weird number for mike to pull out) against it. There’s still some shifts, but it’s overall positive among all those groups. It’s interesting to see what’s new to different people too.

CH: All the surveys I’ve seen have asked how long have you played D&D. You’re saying the differences haven’t been that pronounced?

MM: Yeah. To give you an example, we have a lot of people who say they want the Fighter to have more options. It’s the most pronounced among players who have played 3rd and 4th, but you still see more than half the players who played 2nd or 1st saying that as well (again, without an increase in THAC0, how else will a fighter improve in combat?  more options or maneuvers is the only way.  Self fulfilling prophecy)  . I think it’s because even though 1st edition didn’t have that, they know what they want to play (yes - a fighter that gets better as they level). So a player who plays a newer edition with a simple Fighter says “if I wanted that, I could play AD&D” (Exactly Mike - you hit the nail on the fucking head! This is the very reason trying to appease all players of all editions will fail.  All of the previous editions are still in print in one form of another and will be FOREVER because of the OGJ.  Well, maybe not 4e in that case but 3x and prior) but in this context of playing a newer edition, I want that thing, so just go ahead and give it to me.

Doing the AMA today has shown that- I don’t want to call the questions boring, but a lot of them have been the same. Like “why is the Fighter boring?” (because 4e players expect every class to be equally good at everything, and fighters don't have the "flash" of clerics and wizards) OK, we’re going to add maneuvers to answer that, so I’ll move on. Then the other question is “if we’re already playing an edition of D&D we like, why should we switch?” (didn't I already answer this?) What it comes down to is that those editions have a very specific flavor (sure, it's flavor from the RULES.  If I want to show 4e players what a 0e game was like, D&D Next may get me to the parking lot of the ballpark.  Swords & Wizardry White Box Edition will not only get me in the ballpark, but put me on the ball field. Did I mention it's free? Mike, in using DND 5e to recreate the "feel" of earlier editions, you neglect to acknowledge that you are competing with OGL / OSR rule sets that are extremely faithful to the source material and are available for free in PDF. You remember what PDFs are, right? Those are the things WotC removed from RPGNow on short notice, and left many of us without access to our legitimate purchases. Now I now why you don't like PDFs. It's not the piracy, its the competition ;) In Next, if we do it right, you’ll be able to make your own edition of D&D, and maybe in a way you weren’t able to before, just because it’s more than house rules (wait, WotC makes optional rules, they are legit.  A DM or RPG group make optional rules, and the are illegitimate?).

And thus ends Part One of the interview.  This is too long to do as a single piece, and my comments are longer than is usual.  Damn you Moe T!


This has been The Grumpy Dwarf