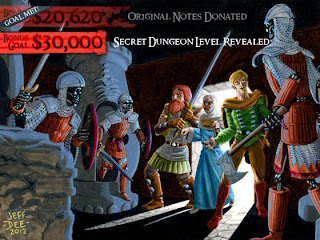 Dwimmermount had a goal on Kickstarter of $10k and came in just short of $49k.  Simply amazing.

Let the naysayers say what they will about the RPG hobby and the OSR, but from where I stand it is certainly picking up steam, with or without the Albatross of D&D Next standing in the wings.

Now I'm certainly looking forward to all the goodies I'll be getting for supporting James' baby but I'm even more excited about placing this in my upcoming ACKS campaign.

I'm really looking forward to the illustration booklet that is now being included.  Besides the fact that I love OSR style art, one of my favorite memories of playing AD&D was playing Tomb of Horrors.  Not just because one of my fellow players stuck his head in an Orb of Annihilation (although that did lead to much laughing by all but him, but I digress) but because of the booklet of art that was included to show the players actual dungeon scenes.

Yes, you can certainly draw a picture with words, but it is often more effective to show the actual picture, especially when it it well done.  I can't wait to hold them up before the webcam in the G+ game.  What?  I can actually show the pictures from the PDF directly through Google+ Hangout?  But that would ruin the Old School Fun ;)

(If you didn't get the Spinal Tap reference in the post title... Shame on you!)
Posted by Tenkar at 10:46 PM