Games From the Basement - Thieves' World 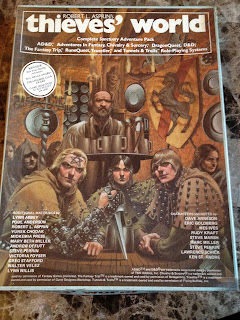 Alright, Thieves' World technically isn't it's own game.  It's closer to being a "Universal Supplement" as it claims support for 9 RPGs.  Imagine that!

It is based off of Robert Asprin's Thieves' World Anthology series.  The first few books were the best... I think i tapped out around number 5 or 6.  It was a nice experiment allowing multiple authors to share stories in the same setting.

What games did it have stats for?

AD&D, D&D, Tunnels &Trolls, Chivalry & Sorcery, DragonQuest, The Fantasy Trip, RuneQuest, Adventures in Fantasy (I don't know this one) and even Traveller.  Yes, Chaosium got permission from TSR and the like to use their stats.  It really was a different time in gaming. 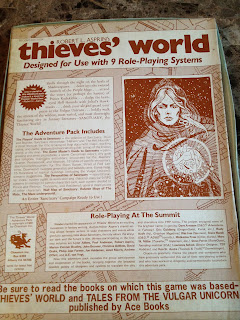 Ken St Andre writes the T&T section , Marc Miller the Traveller section, Eric Goldberg the DragonQuest section, Dave Arneson the Adventures in Fantasy section (now I need to find a copy of the game) and a few other names that bring back memories of that time in gaming (Steve Marsh, Lawrence Schick, Steve Perrin, Greg Stafford, Eric Goldberg).

The city is mapped awesomely.  Really.  Did I mention the maps? ;)

If I recall correctly, Midekmia Press also worked on Cities or some such supplement.  Random tables galore.  You could probably run a session solely off the tables if the GM was willing and able to work with the results.  Yes, this was a city sandbox.

We used this off and on, but for the most part, it is very Thieves' World specific, and my players for the most part hadn't read the books.  It's still an awesome source of charts for any city adventure, so long as you scrape of any parts that are Thieves' world specific.
Posted by Tenkar at 8:02 PM

Email ThisBlogThis!Share to TwitterShare to FacebookShare to Pinterest
Labels: games from the basement, Thieves' World