Games From the Basement - Space Master 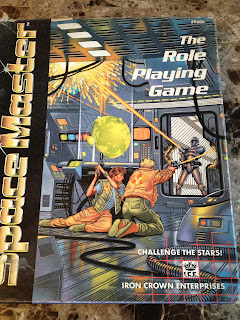 My God but we played the crap out of Space Master!  For a period of nearly a year, our gaming group shrunk to just 3 regular players - Paul, Tony and myself, the GM.

D&D just wasn't going to work well with a 2 player party (this was in the AD&D 2e era).  So we experimented with other games.  We did some board gaming, some Talisman, and then somehow we settled on Space Master.

I don't know how or why we got there.  I had Rolemaster for a number of years, but we never really played it.  We played MERP off and on in the early days of the full group, but it never really felt like Middle Earth to us.  Still, we kinda had a handle on the Rolemaster system due to it's younger and simpler sibling, MERP. 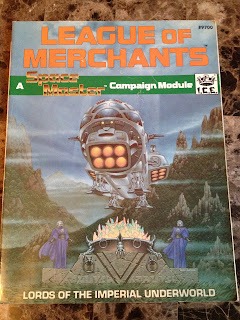 One day I suggested we try Space Master, and play we did.  I am damn certain I did not have a handle on all the rules, but Tony and Paul didn't know the system well enough to know I was fudging half the time to keep the game flowing.  Or maybe they knew and just didn't care.  Doesn't matter, as we had a blast.

I tried to keep the opposition numerous but weak.  Lots of crits by the players, occasional crits on the players kept the story and the action moving.  Damn, we had good times, and it worked well with the small party that we had.  I don't think we ever played it with more than the three of us.

I doubt I'll play Space Master again.  It's a bit more rules heavy than I like these days, and it would be impossible to get the three of us together again if I tried, as we lost Paul on 9-11.  The memories are strong even if the details are a bit fuzzy at times.  As was my knowledge of the rules, apparently ;)
Posted by Tenkar at 9:28 PM

Email ThisBlogThis!Share to TwitterShare to FacebookShare to Pinterest
Labels: games from the basement, space master