Games From the Basement - Talislanta 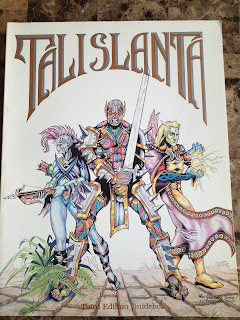 The "Games From the Basement" series of posts is now also including "Games from the Top of the Closet That Haven't Been Seen in 15 Years or More".  This thus gives us the latest entry - Talislanta.

My earliest memories of Talislanta were the ads in Dragon magazine with the tagline "No Elves!"  Which is true, there aren't any elves in the book.  There are, however, numerous races and archetypes.  More than I care to count.

Judging from the pristine binding of this 320+ page rulebook, I can safely say I never made an attempt to run this, let alone read it to anything that resembled completion.

This is the 3rd edition of the rules, published by WotC before they picked up the bones of TSR.  Heck, Jonathan Tweet is listed as one of the two authors (Stephan Michael Sechi is the other.  He's also the copyright owner).

If you want to play along at home with this posting, you can grab just about everything published for Talislanta for free at the Talislanta website.  Heck, the rules are even released under the Creative Commons license (or so says wikipedia).
Posted by Tenkar at 3:59 PM