Games From the Basement - Top Secret 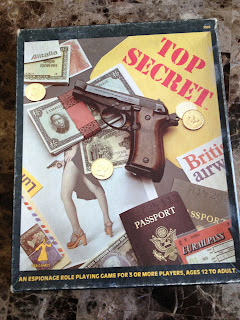 Apparently I have the 2nd edition of Top Secret.  I have never seen a 1st edition, and had assumed all these years that it was a 1st.  No big deal, I don't think i opened the box after 1985.

I remember reading this in my science lab classes in High School.  If you finished the lad in the first period, the second period was a free period of sorts (apparently you couldn't go to a friends house that lived nearby for lunch - found that out the hard way... heh).

I still remember the crappy as shit smaller than usual set of red and green d10's it game with.  I'm sure if I emptied out my dice collection, I'd find the pair, all chipped and pitted.  The dice were still better than those that were included in Gamma World (which literally disintegrated with use).

I ran a handful of sessions but the charts were killers.  They weren't even fun charts like in RoleMaster, but painful, complicated charts for the sake of having charts.  I had high hopes for it back in High School, but I quickly learned Top Secret wasn't for us.  It also soured me on the James Bond 007 RPG, which I refused to buy after this experience, which is a shame.  I've heard good things about 007 (at least compared to Top Secret).

Some of the guys from the Happy Jacks podcast recently ran Top Secret at a con, more as a goof than anything.  Strangely enough, the players for the game wanted to play it straight up ;)
Posted by Tenkar at 3:38 PM

Email ThisBlogThis!Share to TwitterShare to FacebookShare to Pinterest
Labels: games from the basement, top secret