Games From the Basement - Champions 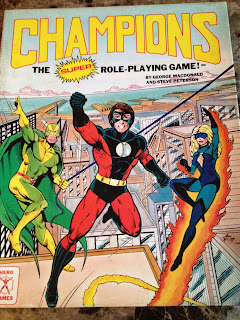 Champions is the first supers game I ever played.  Wait, I may have played Villains and Vigilantes prior to it - it's kind of hazy, and I found out about them both around the same time.  Champions is the one I actually bought.

It seemed more balanced than V&V.  It's strange that I was worried about balance back in High School, as we played AD&D without any concept of "Point Buy", so some lucky rolls could certainly do you good. Ah, who am I kidding, AD&D was roll 5d6 6 times (keeping the best 3 dice outa five) and rolling 6 characters to choose from.  Balance wasn't an issue, as we were all over powered, but I digress).

What little I remember of V&V (besides the ads in Dragon) is you could roll some really stupid power combinations, whereas Champions allowed one to create the superhero of their dreams, or at least close to it.  Champions was my first experience with "point buy", which I think works better for supers anyway. 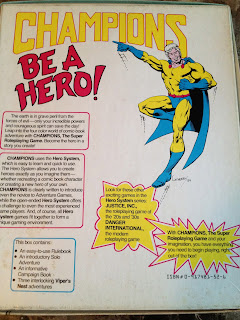 Did I mention I'm not a huge fan of supers?

I never ran a game, tho I played in a few sessions.  Then I played some Marvel supers.  I've stayed away from supers pretty much since.  Not bad games, just no made for me.

Still, I've looked at how far the Hero System that is the engine of Champions has come - and it scares the crap outa me.  My lord but it looks like one hell of a crunchy and heavy system those days.
Posted by Tenkar at 9:46 PM

Email ThisBlogThis!Share to TwitterShare to FacebookShare to Pinterest
Labels: campions, games from the basement