Another Game I Own and Never Played - Deadlands 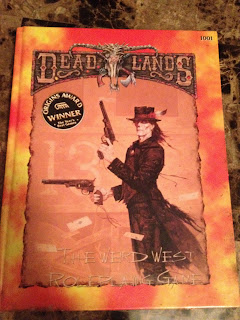 Damn it!  I was pretty sure I ran a session of Deadlands, but as I can't recall the details, and the rulebook is copyright 1996-97, I'm pretty sure I never ran it.  My last GM'ing session was, believe it or , early March of 97.  March is when my days off switched from Sat / Sun to Wed / Thursday for six months.

The group was already feeling the pull of family and other adult responsibilities post college, and my working weekends would be the death knell for us as a table top role playing group (we did progress shortly thereafter to Everquest and the like, but that's a whole 'nother story ;)

Still, the setting of Deadlands was something I quickly devoured.  It was different.  It was exciting.  From the point of view of someone with a BA in History, it hit all the right buttons.

And yet I never played it.

That should change over the coming months.  I plan on running Deadlands: Reloaded (Savage Worlds) as one of the story arcs in my rotating system / setting game nights via G+ Hangout.
Posted by Tenkar at 9:34 PM