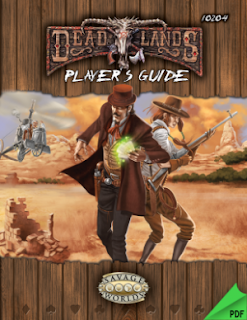 I must say that Pinnacle / Studio 2 certainly know how to put beautiful RPG books together.  The art in the Deadland's Reloaded Player's Guide is nothing short of amazing - everything evokes the atmosphere of the setting.  You are given express permission to print the PDF for personal use, but the ink cost would be insane.  Still, its a nice gesture. (Layer control for the win)

From a technical standpoint, the Deadland Reloaded Player's Guide PDF is aces.  Not only is it bookmarked, but the Table of Contents is hyperlinked.  Huzzah!

As for the contents of the book, we get the setting background from the player character's POV.  It should be enough to get most players IN character.  Character generation (including new hinderances and edges), gear and goodies, unique setting rules... it's all there.  Some GMs may feel there is too much there for the players, but as this is an alternate history setting, and the PCs are living it, I think it's perfectly fine to bring the players (mostly) up to speed.

This coupled with the Gamemaster's Guide and the core Savage Worlds rules are all that are needed to run a Deadlands game (and from what I've heard, you probably want the Horror Companion too).  I'm hoping to run a story arc or two using the Deadlands setting starting in the summer.  Hopefully it's enough  time to bring me up to speed ;)

But that's okay, as the Deadlands Player's Guide doesn't read so much like an RPG sourcebook but more like an actual guide to the "Weird West".  Therein lies half the fun ;)


Strap on your six-gun and saddle up, partner. There's Hell to pay and the currency is hot lead!


The year is 1879, but the history is not our own. The guns of the Civil War are silent in a tense cease-fire. California is shattered by the Great Quake Quake of '68, a superfuel called ghost rock revealed in the new channels and cliff faces. Powerful Rail Barons strive to complete a transcontinental railroad, and the Great Rail Wars exact a bloody toll in the Union, the Confederacy, the Sioux Nation, the Mormon state of Deseret, and the Independent Commonwealth of California.

The Tombstone Epitaph has always been filled with lurid tales of daring desperadoes and deadly drifters, but lately the West's most-read tabloid claims there's something more sinister stalking the fronteir's lonely plains: monsters! Fortunately, where there are monsters, there are heroes. Squinte-eyed gunfighters, card-chucking hexsligners, savage braves, and righteous padres have all answered the call. And if they fight hard enough, they might just discover the identity of the mysterious Reckoners some say are behind it all.
The Player's Guide is the core rules book for player of Deadlands Reloaded. It includes new rules for shootouts at high noon, new Edges, Hindrances, and powers, and everything thing a cowpoke needs to begin his journey into the Weird West.

This full-featured PDF includes a hyperlinked table of contents and index, bookmarks, and layer controls so you only print what you need.