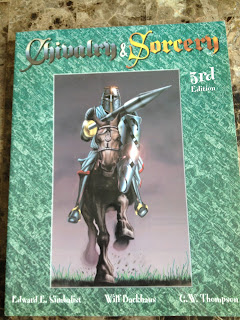 I literally had no ideas that I owned Chivalry & Sorcery 3rd Edition.  Some of the games I rediscover I go "oh yeah, I remember this.  I read the first dozen pages then put it down" or some such.  I have no such memories of C&S.

Heck, even the binding looks like the book was never opened.

This is really irking me, as it seems like it mysteriously appeared on it's own on a shelf, and I know there's no way that could have happened.  I am glad that I didn't pick up a copy off of Ebay last year, as I'd now have 2 copies of a game I never read. 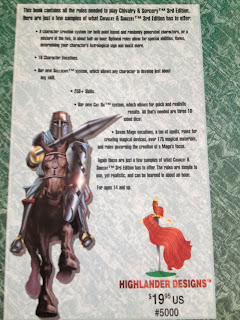 Heck, I opened up and tried to read C&S 2e after grabbing that on Ebay.  Not saying I got far, but I did get farther than I ever attempted with 3e ;)

Glancing through it now, I can see it is an extremely crunchy system.  Lots of charts, lots of text, lots of numbered sections.  There was a time when I might have been able to absorb the information in this rulebook and potentially run a game.  That time in my life has been lost to me.

Might I be able to play in a game of C&S?  Sure, so long as C&S was second nature to the GM, but that goes for any system.  A knowledgable GM makes up for any deficiencies in his players.
Posted by Tenkar at 9:51 AM

Email ThisBlogThis!Share to TwitterShare to FacebookShare to Pinterest
Labels: chivalry and sorcery, games from the basement