The Original 7 - Dungeons & Dragons "White Box" - Packing It All Up 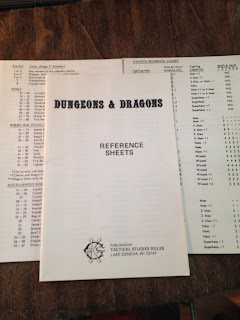 I think the only thing I didn't address in the D&D "White Box" in one of the previous posts is the Reference Sheets Booklet.  I call it a booklet, as it is assembled as such, but it is not bound or stapled, so the pages can easily be removed.

An experienced referee could probably run 95%+ of his game right from these sheets, with minimal referring back to the 3 booklets.  Which is pretty awesome if you ask me.  In a lot of ways, these sheets are the precursor to the DM Shields.

So, what is my overall opinion of the Original Dungeons & Dragons "White Box"?  Pretty damn high.  For the time it was written, it is (mostly) well organized.  Although it most certainly has wargaming roots, those roots kinda fade a bit in actual gameplay (or at least I expect they would, especially with a group that isn't rooted in wargaming itself).  You can read this and get an idea of what D&D was about.  I do think you would be hard pressed to pick this up and play this game as the rules intend with out having an experienced player start you off.  This isn't an introductory game (as it was the first of it's type and it was aimed initially at war gamers, you can rightfully surmised it was written with a wargaming background as an assumption in it's player base)

Production quality is top notch.  It's amazing for me to think this was before the days of desktop publishing.  The box has enough room that it can store other booklets, which was good planning (if planed) with the D&D Supplements that were to follow.

After all this, what would I give it as a final score?

Dungeons & Dragons "White Box" is going to score 4 Steins, with maybe a partial buyback on one of them (like a 4 1/2 score).  It was a ground breaker, professional produced and did all of the right things, with the possible exception of assuming that it's paler base would be primarily war gamers, as it quickly broke itself from that mold and found a wider audience.
Posted by Tenkar at 1:44 PM