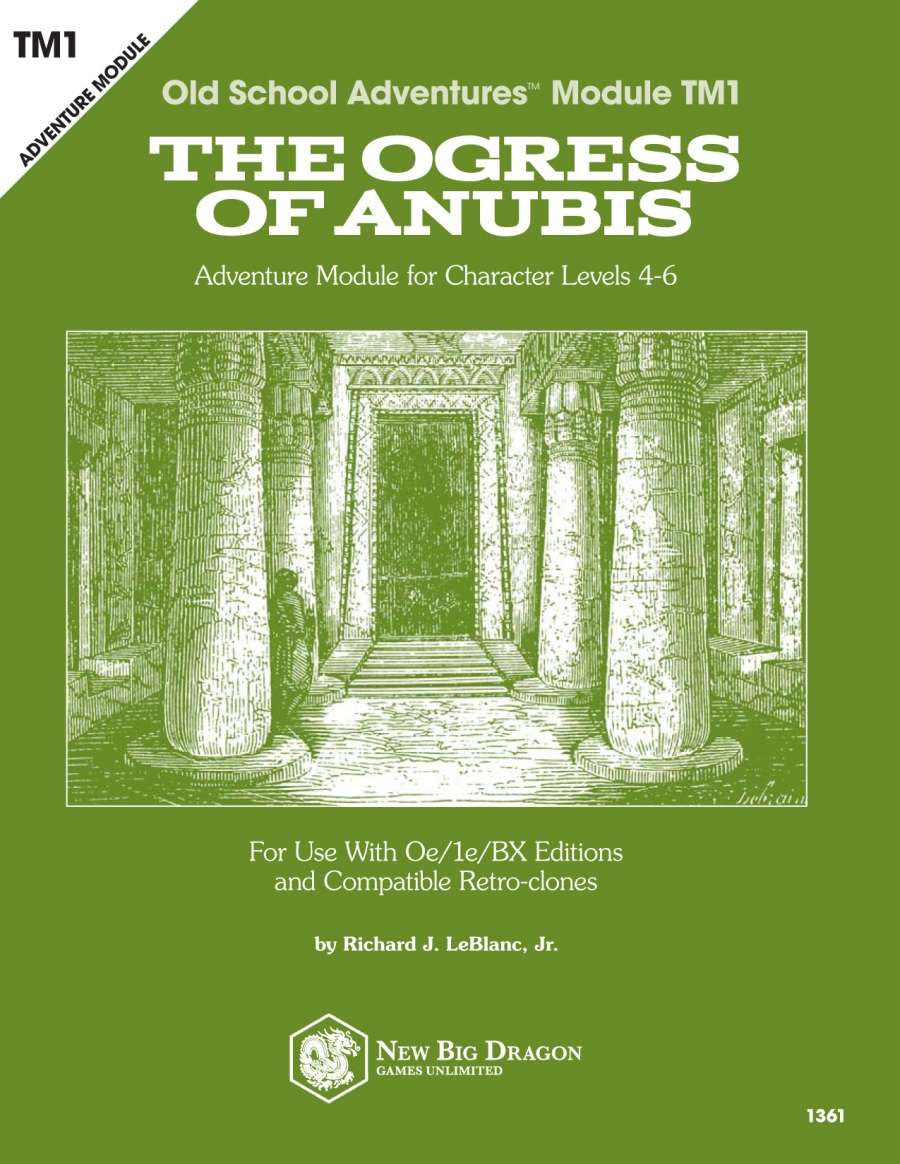 Here's a free Egyptian themed adventure for character levels 4 to 6 - The Ogress of Anubis.

And you know what? Even if the adventure is hard for you to slip into an ongoing campaign, it includes a series of unkeyed tomb, cave and even a sunken city map.

(Actually, it may fit well with a few tweaks into a DCC RPG campaign)

The price is free, the maps are decent - what are you waiting for?

An Egyptian-themed Adventure w/ Sandbox Support
for character levels 4-6, to use with 0e/1e/BX and compatible retro-clones

Azeneth believed the life of the high priest (or priestess) should be as comfortable as that of the kings and the gods. She spoke her contempt for her father’s “weakness” loudly and publicly, almost from the time she learned to talk. As she neared her teens, she made it known her plan was to supplant her father and become high priestess of the temple, sometimes claiming it was her place as the incarnation of the goddess Nekhbet.

Many say Azeneth has the power to command serpents, and it was she who sent the asp that killed her father Kemosiri. Regardless, she siezed her position as high priestess of the temple and set about her accumulation of power and wealth.

Recently, children from the villages around the temple have begun to disappear. Rumors abound that Azeneth is sacrificing them and cannibalizing them because she believes this will make her wealthier, more powerful, and more divine. The people of the villages have begun to refer to Azeneth as the “ogress of Anubis”—believing it was Anubis himself that made this woman mad, and commanded her to consume the children she sacrifices.

Someone must end this reign of fear and terror, and try to return the children alive—if it is in the will of the gods.

Includes the following: information for adapting to different OSR rules editions; adventure background; regional overview (small map + info on villages and wandering monsters); information on the temple compound and its vicinity (including wandering monsters); a detailed map of the temple compound; a 4-page detailed encounter key for the temple compound; new monster (animal mummy w/ 7 variants, statted for Oe/BX/1e); "generic" stats for all monsters and NPCs mentioned in the adventure; 12 pre-generated NPCs w/ details; 10 adventure seeds (for continuing adventures in the area); and 8 additional unkeyed maps (7 tombs, 2 caves, 1 sunken city) for use with the adventure seeds.
Posted by Tenkar at 12:12 PM