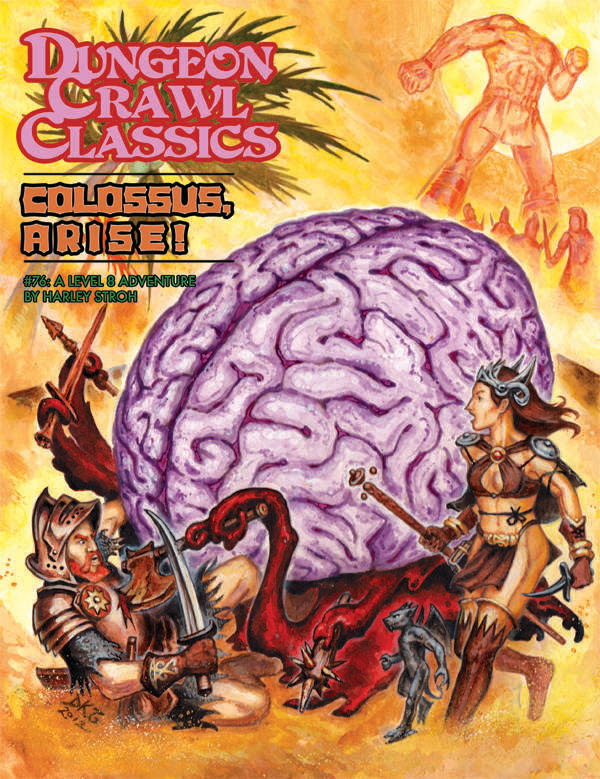 Colossus, Arise! is an 8th level adventure for the DCC RPG. Let that sink in for a bit. 8th level. That's the approximate equivalent of 16th level in other OSR / OGL RPGs. And yes, it can easily bring your campaign to a crashing end, but at this point your campaign is at it's natural end or close to it - and oh my what an end it would be.

How dangerous is Colossus, Arise!? Here's how +Harley Stroh puts it:

I hope all of the PCs have henchmen, because the body count will be exceptionally high.

Actually, in the likely event that Colossus, Arise! causes the timely death of the PCs in your campaign, you probably ended things on such an epic level your players will be eager for next week's funnel. If you're going to kill the party, do it on a level where their failure destroys the world with them. In the unlikely even your players succeed, their triumph will be that much greater.

Who doesn't want to come face to face with a 300' undead titan? Alright, pretty much everybody - but if you can defeat it and save the world? Woot!

This is a bit of a thinking player's type of adventure, because when you think about it, the usual method of sword and spell is probably not the most effective manner to take down a 300' tall undead titan. I like  adventures that make you think. No worries, still plenty of other stuff to kill or be killed by.

Lots of handouts included in this one. Make copies and hand them out as souvenirs to the players that lose their PCs ;)

So, how long would it take to get the average group to level 8 playing DCC RPG once a month?

Giants stalk the shifting sands as the lost city of Stylos awakens from its deathless slumber. The Fourth Age of Man is at hand! All that stands between the gigantic hordes of Stylos and their conquest of the world is your band of adventurers. Sinister traps, implacable foes, and the crushing tread of the dread Colossus all lurk within these pages, eager to test the courage and cunning of even the most accomplished adventurers.