Announcing the Winners of the Signed Tunnels & Trolls Goodies Contest 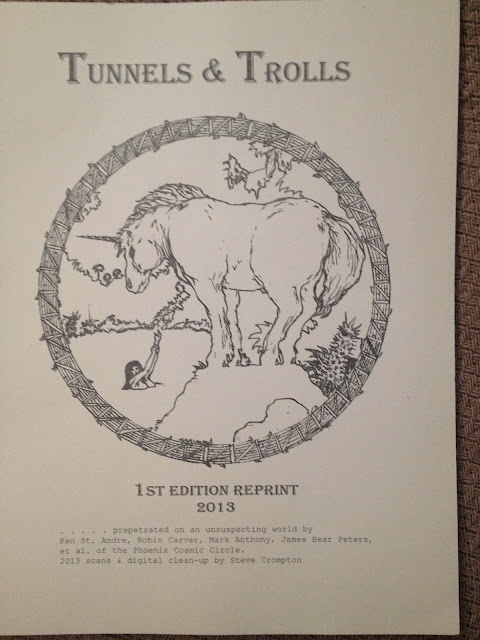 We had lots of entries to this contest. Damn good entries too. I added two prizes to the pool to bring the total to thee and that still isn't enough to cover all those that made +Jason Paul McCartan  and myself laugh and smile. Ah well, better luck next time for the others.

Entrants were asked to simply tell us why YOU deserve it. Be entertaining. Make it fun, as that is certainly what T&T is.

The winners are as follows:

For the signed reprint of the Tunnels & Trolls 1st Edition rules complete with typo on the cover:

Why do I deserve the reprint of TnT 01? The reasons are myriad, and you already know that myriad a little lamb. Therefore, I shall number them?

1. I shall use the material to compare and contrast all editions of TnT, Monsters Monsters, Stormbringer, and any other St Andre rolegames which use compatible mechanics. Sadly, this rules out Starfaring, but may include the Powers superheroes game.

2. With this knowledge, I shall declare myself the Official Tunnels 'n' Trolls Historian. As such, I shall prepare an Official History and an Archive so this information will be available to fiture generations.

3. I'll finally get that poor cover girl out of the lake and get her some clothes. After 37 years, she must be a human prune!

4. I shall create new solos using this set of rules and no other.

5. I shall drive my grandkids crazy running games with this.

6. Most of all, because I shall eat pie when doing all the above.

You know why I deserve this awesome Tunnels & Trolls 1e reprint? Because I've never played the game before. Seriously though, stay with me.

But I will devour this book. I will use it to infect my friends and my play groups. I will convert them to the dungeon crawling ways of this edition from the pits of the past; or, 1975.

You see, they won't know what hit them. Thinking they are safe in their typical fantasy dungeon environment, they will be wrong. The Gods of Gygaxian Lore cannot protect them from the great Flying Buffalo. No, they will weep. They will run. And when I am finished with them, much like masochists with severe Stockholm Syndrome, they will be begging for more. They will be hooked.

Never again will they kill Goblins or Kobolds the same. No. It's not as simple as rolling a d20. Soon they will learn that one must both strength and dexterity, and perhaps a little bit of luck to pull off their acts of derring-do.

And in my hands I will mold them with this most marvelous of tools. They will discover how to game, circa 1975. They will learn. And when I am done running through adventures within the tunnels that are filled with trolls, they will beg to run it themselves. And then finally I'll be able to run my Faerie Warrior. Finally!
---
On a less humorous note, I have heard of Tunnels & Trolls but have never checked it out or given it a shot. As I've been expanding my gaming repertoire over the past year or so, I'd love to do so further with a blast from the past that is far from my zone of safety that is D&D.

For the signed map of Trollworld:

Once upon a time I went exploring in Buffalo Castle. Sadly, I was caught early on in a Deathtrap, but I was able to use my mnemonic Equalizer to negate it. I then wandered in a Labyrinth for a while, Naked, and I thought I had met my Doom. But really I only ended up wandering out of Dargon's Dungeon in some sort of Weirdworld, which I felt was Overkill. I then traveled Beyond the Silvered Pane to the City of Terrors to play a game of Sorcerer's Solitaire. Following this, I became a Sword for Hire in the Arena of Khazan, but was able to escape through the Sewers of Oblivion. i then sailed upon the Sea of Mystery to the Blue Frog Tavern in the Mistywood, where I met the Gamesmen of Khazan Beyond the Wall of Tears. Amongst them I fell Captif in d'Yvoire, for a sorceress desired The Amulet of Alkti so she could join the Red Circle of magic. I then took a Caravan to Tiern to visit the Dark Temple When the Cat's Away. That's when I joined the Elven Lords on a Rescue mission and ended up here...

Thanks to all that entered :)

For the three above - email me at tenkarsDOTtavernATgmailDOTcom with your snail mail address so I can get these things out to you. I'm on vacation, so it may not got mailed until early next week.

Email ThisBlogThis!Share to TwitterShare to FacebookShare to Pinterest
Labels: contest, Tunnels and Trolls