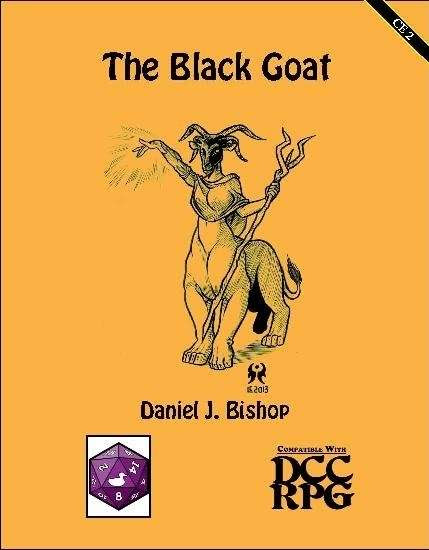 DCC RPG Week continues here at The Tavern. The latest release for the DCC RPG game is The Black Goat. It bills itself as a "campaign element" for the DCC RPG and it took me a little bit to wrap my head around the concept, but when I did, it's pretty damn good.

The Black Goat is not an adventure itself, it more of a location and an encounter that has the potential to seed other adventures. This and releases like it help turn episodic play towards the sandbox. (I say "releases like it", as this is the second in the series but the first to release on RPGNow). There is more game play potential in The Black Goat them most of the shorter DCC RPG adventures and it requires more roleplay than brawn to be successful, which is a nice twist.

New patrol, new patron spell, decent map of the location and lots of further gaming potential. If a player gets bedded by The Black Goat, more power to them. ;)

There is no level range indicated and I don't think one is needed. The Black Goat is there to set up further adventuring for the PCs, and that's easy enough for the ref to tweak to his party's needs.

Not all mountain passes are lonely.

Come meet the Mahmat Troth and the One they adore.  Only in the high pass will you discover what the Black Goat truly is.

Each of these areas is short enough to be played through by most groups in only a single session.  That doesn't mean that the value of the area is limited to a single session – each adventure includes notes on “squeezing it dry”…effectively getting the maximum re-use from your investment.