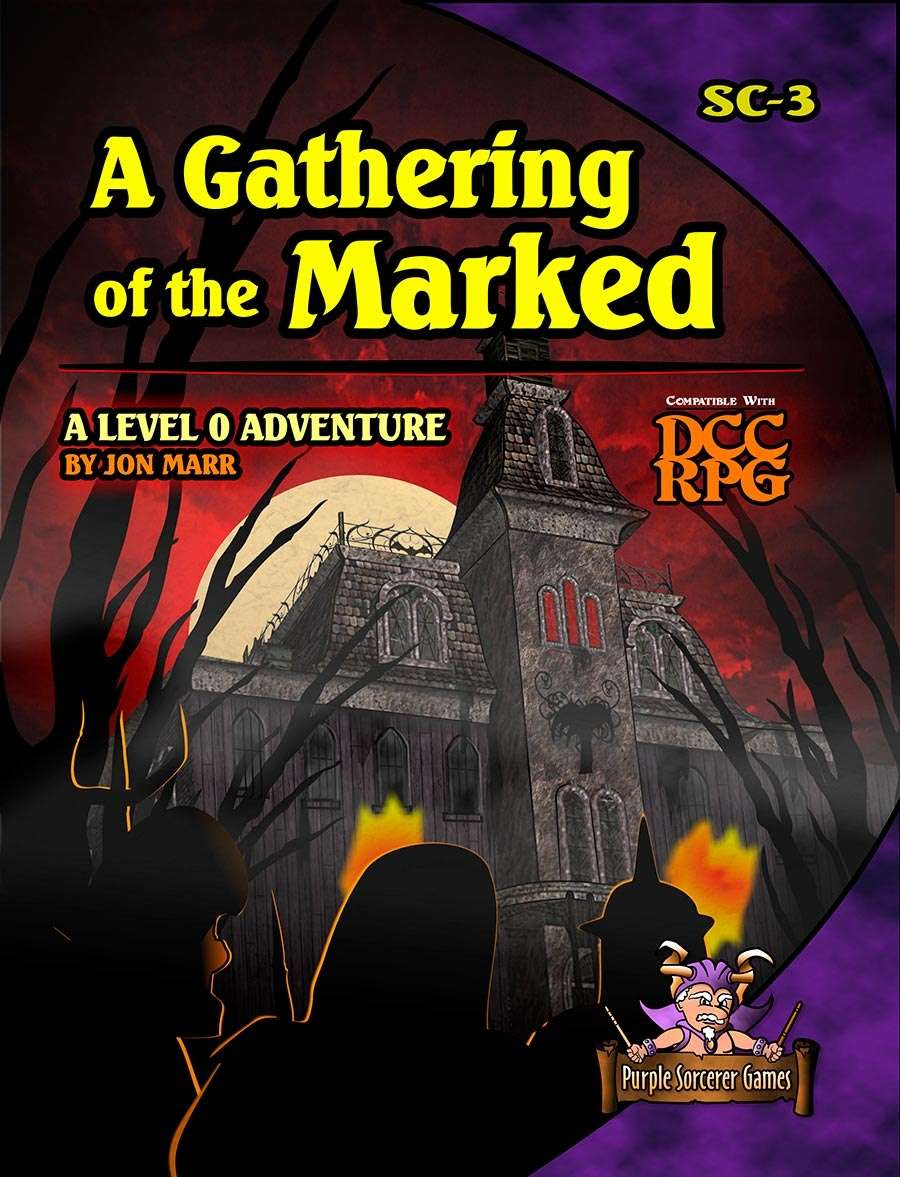 A Gathering of the Marked is Purple Sorcerer's latest release in it's line of DCC RPG adventures. If you aren't familiar with Purple Sorcerer's stuff, it's always high end with great production values and a little bit of whimsy to juxtapose the usual DCC RPG darkness.

This time around, +Jon Marr gives us a DCC 0 level funnel with ALL the trappings. I do mean ALL of the trappings. Paper minis (pages and pages), pregen characters, player visuals (perfect for use in Roll20 and other online VTTs) - lots of value for your gaming dollar.

What about the adventure itself? Like most of the Purple Sorcerer stuff, you're looking at at least 2 sessions of gameplay if not 3. My favorite scene is near the beginning - ask my players if I can spend a good part of the session talking like a pirate - then ask them if I even should ;)

As I said above, there is a share of dark and brooding, but the whimsical balances it out so well, it makes for a unique feel amongst the various DCC release lines.

There are some very unique magic items available for the players to discover. They are not overly powerful on the whole and add some excitement for the players when acquired.

How lethal is it? You can expect the party to get whittled down constantly, perhaps to the point they won't even realize their total loses. There are opportunities to replace lost party members and keep the funnel moving, but it is lethal.. It looks to be a lot of fun to run - or play in. Well done!

Rich and poor, bond and free: every few months an unsuspecting few awake to find a ragged circle of midnight black scrawled on their foreheads; a dark summoning whispering on the edge of their consciousness. All who live in the shadow of the Great City know to ignore the call of the mark is to invite madness and a lingering and horrific death, so each will find his way to the sending stones, and the unspeakable peril that waits beyond.

Designed for 0-level adventurers, A Gathering of the Marked challenges a band of strangers to endure the mad games of a power who's motivations are as mysterious as its identity. Can the summoned survive to wrest control of their lives once more? Will they turn on those they struggle with, or band together to defeat a common enemy? Will they finally come face to face with the twisted power that has called them, and uncover its dark secrets? All will be revealed in A Gathering of the Marked!

Features of A Gathering of the Mark

-Horrifying fun compatible with the Dungeon Crawl Classics RPG from Goodman Games (easily convertible to your favorite 'old school' system... and by easy, we mean easy easy!)
-Explore the cursed village of Haven's Fall, battling shambling horrors, freakishly nimble puppets, cow-devouring tentacles and more!
-Uncover the secrets of the Cult of Athax: foul minions of a Shadow Wizard with dark designs on not only the world, but you in particular!
-Packed with adventuring possibilities: twice the length of Perils of the Sunken City, with full color artwork throughout all 24 adventure pages + 24 additional appendix pages.
-Nearly 100 paper miniatures included for those who want to see the action unfold. (13 Free battlemaps available on the Purple Sorcerer Games website.)
-Virtually every image is included in easily printable format in the appendix making creating handouts a breeze!
-New: Comes with two streamlined tablet versions for both large and small tablets and mobile devices.
Posted by Tenkar at 10:51 AM