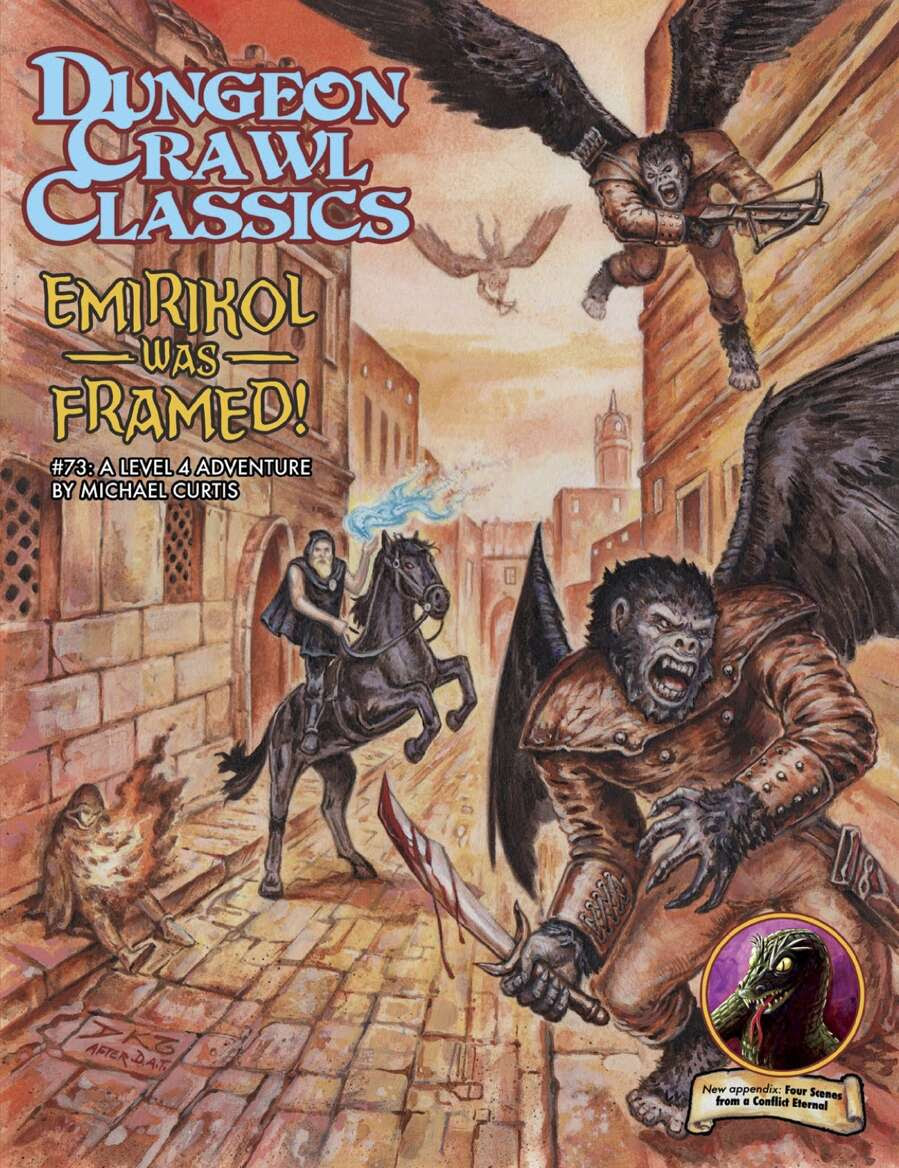 Emirikol Was Framed! has probably the most awesome trap I've ever read in an adventure. Sadly, it plays out better at the table then it does on G+ Hangouts, but that doesn't take away from the rest of this awesome adventure.

It's an adventure for six 4th level characters and it seems to have situations where each of the core classes can use their skills / abilities / shine, so a well rounded party would be the best bet (but isn't it always?)

I like adventures that kick off with the action, and Emirikol Was Framed! does such right at the start. It's an awesome way to get the PCs involved in the story and may even give them desire for a little payback down the line a bit.

Totally as a side note, but I'm learning to really appreciate having adventures in PDF format when I run games via Hangouts. I can extract the maps and reveal them slowly via Fog of War and i can extract the relevant art and treat it like player handouts when appropriate. Needless to say, the adventure's art is suitable for use as player handouts.

The meat of the adventure is some of the most atmospheric - is that even the right word? interesting? challenging? evokative? - whatever - full of shit I'd love to run or be run through. If it plays half as well as it reads, this is one of the better adventures I've come across in my years of gaming. Again, the art reinforces the written word perfectly. It's just damn good stuff.

And then your get to the finale and Michael Curtis take it to 11. It certainly ends on a most epic note. Wow.

All that and a new spell too.

When I get to the end of the week, I may find myself convincing my group o go through some DCC adventures...

The mad wizard Emirikol is terrifying the city! Striking without reason and sending his winged apes to slaughter the populace, the famous archmage has gone too far. Now a coffer of jewels is offered to those who would dare defeat him. The ever-changing walls of his Shifting Tower are guarded by a host of diabolical traps, fiendish guardians, and unimaginable terror. Will your adventurers come out victorious…or lose their very souls in the attempt?