The Grumpy Dwarf Asks: Why Drain the Life Out of Undead Energy Draining? 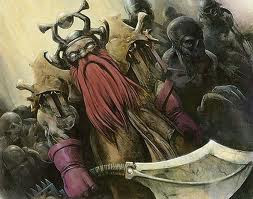 Foolish dwarf! Why are you reading D&D Next articles when you have serious doubts you'll ever play a session? Because, I tell myself, it might become big, or even Big (but not as BIG as D&D was in the past) and it certainly isn't 4e, which can only be a blessing.

So, why is James Wyatt taking the rusty scissors to the already shrinking private parts of the energy drain ability of certain undead? I don't mind limiting the ability to a handful of the critters, or even to just 2 (wrights and wraiths as James writes in his article), but why make the effect inconsequential?

Here's how James sees it:


A wight's most dreaded quality is its energy drain, and here's a place where we're still hammering out some details. In the current playtest bestiary, energy drain is an attack the wight can use in place of two weapon attacks, so it does less damage, but it also reduces the target's maximum hit points (limiting the effects of healing until after the target's next long rest).

Not for nothing James, but really, what's the point at this point? I like the idea of a drain to maximum HP (works even better for Vampires in my opinion, but whatever, we'll work with what we got) but a long rest does away with the effect? Whoop de frickin' do! That's not a threat.

Maximum HP are reduced until the casting of a high level spell, or a restoration potion, or a minor quest - something that actually has an effect on the party's resources. Heck, something, anything that has more of an effect than necessitating a good night's sleep. Maybe add some chicken soup to the requirements, it heals everything I've heard.

Again, it's not the effect that I have a problem with - I like this method much more than level drain. This method has no real risk for the PCs. It's not a threat. It's not something they need to overcome. It's a booboo with a slightly longer heal time.

There's no need to carebear the game to this extent. Trust me, the players will enjoy playing with a bit of actual risk. it makes success all that much better.