"I Wasn't Dead 'Til I Had No Head!" - an Ambition & Avarice Session Recap 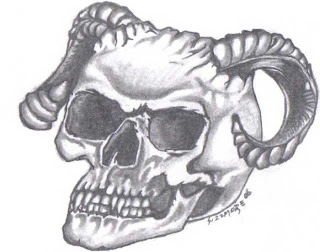 "I Wasn't Dead 'Til I Had No Head!". Say that to yourself in your best Jackie Mason voice. That's what I did when the party found the undead talking skull that had just spent the last 100 years staring at an empty room. An unlit empty room.

I had no idea how this encounter was going to play out. Talking skull that wants to see ANYTHING besides the room he's been stuck in for a century. He wants out. He wants company. He really has nothing to offer the party, but I could sense there was a lot of potential to this encounter, so I winged it.

The best Mister Skull could offer the party was the idea that he never slept and could see 360 degrees around his skull. Was that part of the encounter text? Nope, but seemed reasonable. Besides, the idea of a talking skull (with horns no less) being part of the party was just too good to pass up. Not to mention that I love playing with accents and voices, and it was quickly decided that Mister Skull was a very lonely Jackie Mason - with one liners and everything.

At the moment the skull is tied and strapped to the head of the party's Dark Elf. Don't ask. Sometimes you just run with it. The player wants to see if he could wear the skull instead of his helm. Not a request I had expected, but one I'm willing to work towards.

Oh sure, there was combat and negotiations and a severed foot found, but Mister Skull ruled the night.

As for the quote that I titled this post with, it was the answer to the question "How did you get like this?" or something similar. Said in my best Jackie Mason voice, the line was a killer ;)
Posted by Tenkar at 12:02 PM

Email ThisBlogThis!Share to TwitterShare to FacebookShare to Pinterest
Labels: ambitions and avarice