Just Under a Week to the Release of Barebones Fantasy RPG 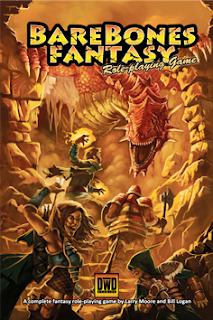 I'm beginning to think Larry and Bill from DWD Studios must be insane. They are releasing a new, high quality RPG into the market in a week and they aren't using Kickstarter to do so. WTF guys!?! How dare you use a traditional method to release your game on time. You could have used Kickstarter and nearly guarantee a late product release ;)

I've been following Barebones Fantasy since the springtime and getting peeks at early betas of the rules.  Color me impressed. I'm an Old School / OSR type of gamer. I've tried Savage Worlds, been intrigued by the Ubiquity system, consider running QUERPs for a bit, but time and time again I come back to one of the various D&D clones or illegitimate offspring. So it may be surprising that I'm actually chomping at the bit to run Barebones Fantasy - I just need to free up the time. It doesn't hurt that the setting book being released a bit later has a town of Tenkar and a Tenkar's Tavern in it ;)

I'm actually thinking of using the included tables from the Adventure Idea Generation section to roll up some ideas for adventures. Must be the "Chart Guy" aspect of my OSR-ness. What can I say? I love me some well done random tables.

The monster section reeks of Old School goodness, but Larry - where the rodents? Can't have a dungeon without rodents :)

Maybe I'll kick off a twice a month BBF campaign with the new year. I already have an idea or two rattling around in my noggin.  Hell, maybe I just need to clone myself and send one off to work and keep one self just for gaming :)
Posted by Tenkar at 9:00 PM