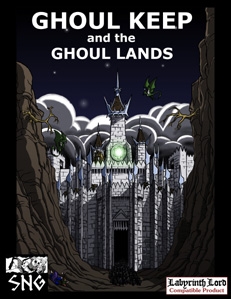 Ghoul Keep and the Ghoul Lands isn't your typical fantasy setting. To my eyes, it feels like a darker Ravenloft.

Actually, darker might not be the right word. Grittier. It's a grittier Ravenloft.

I think it's obvious from the title that undead play a major role in this setting. They are the movers and the shakers. Humans are often the local rulers. Demihumans are extremely rare, and would only be part of adventuring parties - they would not usually intermingle with the locals. Which makes for an interesting quirk to the setting, as non-human PCs are definitely going to be sen as outcasts and not trusted by the locals.

Adventuring parties themselves need to be sponsored by, or comprised of nobles. Depending on their composition and on whose lands they are dungeon raiding, they have to give from 25% to 50% of their loot to their sponsors. As an aside, this isn't an economy based on coinage but barter, so you will often have the reverse of a normal gaming situation - instead of converting valuables to coin, the players will be seeking to convert coin into valuables. They can also get special writs of wealth issued in exchange for their new found loot (at a cost of course)

This is an extremely comprehensive setting, with nicely mapped out cities and towns, with each having enough to run a session or two in each based on the location descriptions. There are a lot of hooks to feed your players. This is very much a sandbox styled campaign setting, which is both its boon and it's curse.

As I see it, native born adventurers become "part of the system", not just by necessity to be licensed to adventure but also because they undergo the Ritual of Cleansing, which marks them and allows them to roam freely at night without fear of the undead. So, if the party is okay with adventuring in undead lands and probably running missions for undead masters at some point, all is well. If they expect to be heroes in the traditional sense, I feel the setting is stacked against them. (they are seen by the populace as heroes, but I don't see their actions necessarily being directed to "heroic acts")

It's a shame, as I really like the setting itself. It has a huge amount of roleplay potential, I just wish there was some "fighting the evil powers from within". Sure, there are some adventure seeds as such, but most of the ones that would put the heroes against the powers that be assume they are outsiders that have found (or been kidnapped) the hidden realm. Which means if they are higher level, much of the setting would be a cake walk, or low level, and the nights would just get them killed.

Maybe I wish it had more of a Midnight "rebellious" undercurrent running with it.

Still, as the author himself states near the beginning: "The Ghoul Lands setting presented in this book may not be suitable for every group, campaign, or style of play. The Labyrinth Lord is encouraged to mine these pages for any NPCs, Factions, New Monsters, New Magic Items, or story ideas that can be ported over to his own game. In addition, the awesome maps of Ghoul Keep and the various settlements, towns, and cities of Makaar Mor provided by Tim Hartin of Paratime Design can be easily restocked and reused to better fit your game world. Enjoy!"

In my opinion, Ghoul Keep is certainly worth it for the sheer "lootability" of it's contents. It's parts are just that good.


Ghoul Keep and the Ghoul Lands is a sandbox mini-setting supplement for the Labyrinth Lord™ RPG that details an isolated kingdom located north of the Duchy of Valnwall. The people of the Ghoul Lands are ruled by the Ghoul King Lorrgan Makaar, a powerful undead creature who has slowly amassed an army of undead to invade the living lands in the south.

Ghoul Keep a.k.a. Morakaal
Ghoul Keep, a.k.a. Morakaal, is a forbidding mountain fortress that blocks the northern reaches of the Pass of the Dead in the rugged mountain range known as the Peaks of Valen. It is an ancient structure, comprised of fused bone walls, angular towers, sharp battlements, and lofty spires whose peaked windows flicker with ghostly green light.

The elite soldiers of King Lorrgan Makaar’s horde dwell here, including evil humans, ghouls, and an abominable race of ghoul-human hybrids known as gahouls. These forces regularly patrol the lands north of the pass, searching for those who would try to enter or escape the Ghoul Lands, but seldom venture far south of the keep’s walls for fear of a mystical barrier known as the Cursed Ward of Valen that brings painful death to any undead attempting to cross it.

What You Get
-The history of the Ghoul Lands a.k.a. the Kingdom of Makaar Mor, with details on its geography, architecture, technology level, and the people, their customs, and way of life.

-Maps of the capital of each of the kingdom's five provinces as well as descriptions of the rulers, dozens of major NPCs and factions, and details of some of the more interesting locations found throughout.
-30 new magic items themed for the setting (many dealing with undead)
-8 new plants that produce interesting natural and supernatural effects
-11 new monsters (including 4 different variations of the typical ghoul)
-6 maps of Ghoul Keep and its dungeons, all fully stocked and detailed
-1 map of a Commoner’s Hall—a specialized marketplace, with all of the shops and NPCs fully detailed. A great starting point for launching a new Ghoul Lands campaign!
-1 short adventure, Kalitus Corpi, designed for beginning characters levels 1-3 (see below for more info).

Take What You Will!
The Ghoul Lands setting presented in this book may not be suitable for every group, campaign, or style of play. The Labyrinth Lord is encouraged to mine these pages for any NPCs, Factions, New Monsters, New Magic Items, or story ideas that can be ported over to his own game. In addition, the awesome maps of Ghoul Keep and the various settlements, towns, and cities of Makaar Mor provided by Tim Hartin of Paratime Design can be easily restocked and reused to better fit your game world. Enjoy!

KALITUS CORPI
Also included with this product is the sample adventure Kalitus Corpi. Kalitus Corpi is a short, site-based Labyrinth LordTM adventure designed for 4-6 characters of 1st-3rd level (about 8-10 levels total). The adventure takes place in a ruined temple that has been taken over by a cannibalistic cult named the Kalitus Corpi. The party must discover the cult's activities, infiltrate the temple, and destroy the cult's avatar—a hideous undead hybrid of man, rat, and maggot known as Raltus the Undying.