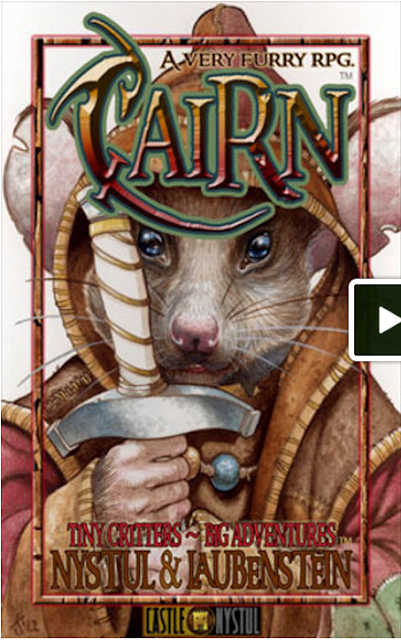 Lets see. Mike ran out of money (which was probably shortly after he received the Kickstarter funds which were spent on his own personal fantasy - Castle Nystul - and a pointless Dwarf Con) without producing anything for his three Kickstarters (oh, almost forgot his scamming through Indiegogo after the fact).

At best, Mike is a foolish, incompetent, idiot that should never be allowed near adult responsibilities again. At worst, he's a thief.

Mike's found a sucker partner to take responsibility of The Infinite Dungeon. Mike claims to be getting the mini rewards together, but the last update was a month ago. Don't expect much from Mike's side of this.

Two weeks ago Mike promised a playable PDF of the Axes & Anvils game. It isn't here yet and again, don't expect physical rewards. The money was spent on staff for the company that can't complete a product.

Today's announcement is for Cairn. This is where I tapped out on Mike, as it was his third Kickstarter with nothing in hand and warning bells went off in my head. Guess what? He has signed over the property to a third party that will complete the project and will offer it in print to backers (just pay shipping & handling) but the Kickstarter promises and stretch goals all remain with Mike.

Is it better than getting nothing? Sure. Is Mike still a fuck up that lived up to his namesake spell in AD&D 1e? You tell me.

Oh, here's part of his Risks and Challenges part of the Cairn Kickstarter. Talk about lying through your teeth:


We have the game in hand being edited even as we speak. The art is mostly blocked out and is being inked. The cover is done, layout has been designed and we are all set to put the thing together as soon as it looks like we have the backing we need.

Real, substantial news has been a long time coming. I hope here to clear up a little of the confusion around the Cairn Kickstarter, let you know what’s going on, and what’s coming up next.

First, this is not Mike from Castle Nystul. I am Ross A. Isaacs; some of you may remember me from a previous update. I have freelanced for Chaosium Inc., Holistic Game Design, White Wolf, and AEG, and I’ve been employed as a full-time employee at Last Unicorn Games and Decipher. I am a seasoned professional with a proven track record for producing quality game products.

My involvement with Cairn, up until this point, was as a freelance writer and editor. I joined the project in 2012 because I truly felt it was a wonderful game in a unique setting, and brought something new, fresh, and charming to the tabletop gaming world.

When Castle Nystul announced that all of the capital from their three Kickstarters (Axes & Anvils, Nystul’s Infinite Dungeon, and Cairn) had been exhausted, I was as surprised as you. All three projects were effectively on hold, waiting on whatever solution Castle Nystul could craft, which could mean potentially months (or even years) until new funding could be secured.

Mike was looking for a solution. I decided to step up and do something. Which is why I’m writing to you today.

Cairn is a wonderful title with a great deal of potential, into which the writers and contributors have poured a great deal of themselves. It’s a truly delightful family-oriented game. It’s a game that you’ll be happy to play with your kids.

You want the game. I believe it deserves to be out there. So I’m going to make that happen.

When it became clear that the Cairn rights were available, I approached Mike about transferring the intellectual property -- the writing, artwork, and any future Cairn projects. He agreed, and we’ve negotiated a settlement. The Cairn title is in capable hands and hopefully my industry pedigree reassures you in that regard.

I am forming a small, independent game publishing company with help from a few of my friends.

You might have read a few things in various places, or been told the status of the project outright. I’d like to draw a line in the sand and look forward, not backwards.
We had a version Mike was considering publishing in his rush to get something out. But the work stopped when the money ran out and the net result is not something I am comfortable bringing to market. Moreover, key elements were left on the cutting room floor and two chapters have yet to be written. The book is not finished nor is it in layout.

All of the funds raised by Castle Nystul’s three Kickstarters is gone. Getting Cairn into print will be at my own expense. As I am sure you will agree, this is quite the financial undertaking. I hope you will understand that any promises made by Castle Nystul during the crowd-funding process remain with Castle Nystul. This means that no other perks can come from my company. I simply do not have the money to cover the production costs for the plushies, the miniatures, the storybook, the hardcover Cairn rules, and so on.

I’ve got a large personal investment in this that is about to get even larger. I have good friends and family who have invested in the project. You paid Castle Nystul for a copy of Cairn. I want to make that happen. Call me “old fashioned” but I believe this is just the right thing to do.

I am therefore offering all of Castle Nystul’s backers a FREE copy of Cairn from the first print run. I will have to ask you for shipping, but I assure you that it will be for whatever I have to pay to get the book in your hands. And I’ll be offering pickup of your copy from future conventions where Cairn has a presence (wherever possible). More details on this to come.

I understand that you might not be happy with this. You’ve already paid money, and gotten nothing for it. All I can do is get you the roleplaying game you were promised. It’s the best I can do.

If you want your FREE copy of Cairn, please email souljar.info@gmail.com
What Happens Now?

To the beginning of August, I will be finalizing Cairn writing and artwork. Layout is slated to begin on the third week of August.

In mid-September, the layout should be done. I will provide you with a PDF at this time. The book goes to the printer.

Printing should be done by the third week in October.

Any Cairn backer who wishes to get a FREE copy (plus shipping & handling) will be sent their book at the end of October.

If you have any questions or comments, please do not hesitate to contact me. I will address your concerns as openly and honestly as I can. From now on, please visit http://www.souljar-games.blogspot.com/for further updates and information on the Cairn RPG. Thank you.

Ross, God bless you for taking part of this project over but I'm glad I don't have to pay shipping for something that was already paid for.
Posted by Tenkar at 7:44 PM