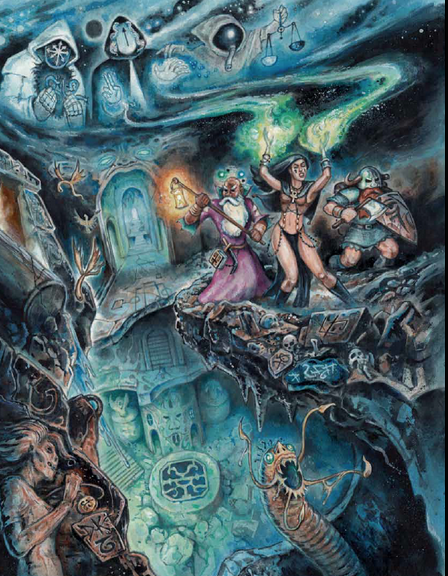 I almost went with "like", but I like nearly all of the systems in the OSR realm of gaming. I fucking love S&W and the DCC RPG, and they seem like such polar opposites.

S&W is concise and simple and if it weren't for spells could probably be run with just the adventure in hand after the DM has a few sessions under his belt. It feels very close to AD&D 1e as we played it back in the day, especially when you add in the classes from S&W Complete (and maybe houserule the stat adjustments just a wee bit).

The DCC RPG is almost nothing like my AD&D 1e of old, and yet it evokes much of the same magic and excitement of my early days of roleplaying. Every spell is something new and exciting. Fighters with their Might Deeds can push things beyond anything I could have accomplished in my days of old. Magic-Users are truly magical. The book can be intimidating, but so was the AD&D 1e DMG.

And then there is the DCC RPG art. Holy fucking shit, the only other publisher that even comes close is LotFP. I love the art because it reminds me of the awesome art I saw as a teenager in the Player's Handbook.

So, what do I run on a mostly weekly basis? AD&D 1e / OSRIC. Notice that both of the systems I mentioned evoke feelings of AD&D 1e for me?

Coincidence? I think not :)

Email ThisBlogThis!Share to TwitterShare to FacebookShare to Pinterest
Labels: DCC, Swords and Wizardry