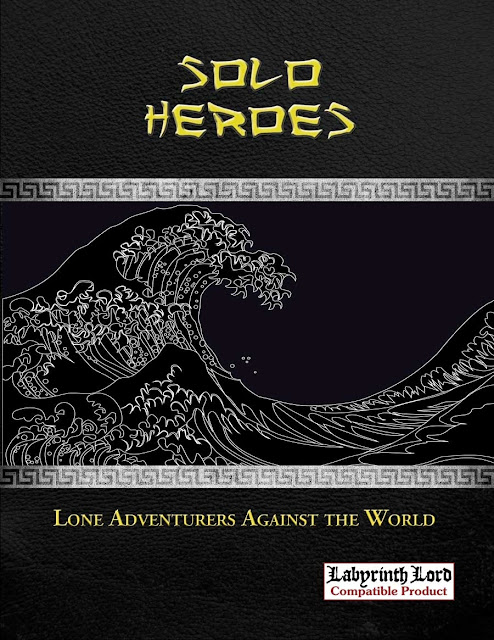 With a title like "Solo Heroes" you might think these rules are for solo play, much like the Tunnels & Trolls solo adventures, but you would be wrong. These are rules, stated as compatible with Labyrinth Lord but in truth usable with little effort with any of the OSR rules of your choice that enable "One on One" gaming using off the shelf adventures.

Almost sounds to good to be true. I haven't had a chance to playtest the rules yet, but I expect they work well, at least at lower and middle levels. I suspect after 5th or 6th level things break down a bit. That seem to be the big power jump for both spell casting PCs and the adversaries players face

The rules are a hack to the power curve built into OSR style rules and it allows PCs to last longer in combat while taking down their foes quick, all without changing numbers on the character sheets or the stats in your favorite adventure.

I do want to give Solo Heroes a run for it's money at some point and see how well it works in an actual playtest. I'm currently running an infrequent 2 player / 1 DM - Swords & Wizardry / Crypts & Things hack as I'm trying to find a solution for balanced play and extremely small parties. This might just be the thing I need.

Sine Nomine puts out quality stuff and Solo Heroes is no different. Lots of ideas in the 7 pages, including a small adventure. The price is definitely right at FREE. Hard to go wrong, even if all you do is mine it for the included adventure.


Maybe you want to show a friend the fun of classic D&D, but you can't pull a group together on short notice. Maybe you have nights where only one friend can make it, and you're tired of breaking out the card games. Maybe you just want to run a side game for somebody, but don't feel like weighing them down with an entourage of henchmen just so they can survive their first combat. What do you need? You need Solo Heroes, a free Labyrinth Lord-compatible supplement for lone adventuring.

While written for the Red Tide Campaign Setting and Sandbox Toolkit, this supplement is compatible with a wide range of old-school games. Within, you'll find a simple set of rules for running classic adventures with just a single PC. There's no need to alter character sheets or rework modules to make them survivable for whatever class your player has chosen- Solo Heroes gives you a handful of simple rules for turning such solitary exploration from a death wish in the making to a daring tale of risk and potential glory.

In addition to these rules, the mini-adventure of The Yellow Toad God's Well is provided to give you a little something instant to run for your player's new hero. And if it turns out you've got a full group for that night's session? Just drop the optional rules and run it by the book. Solo Heroes lets you play the game without painful paperwork and adventure redesign, whether for one player or half a dozen.